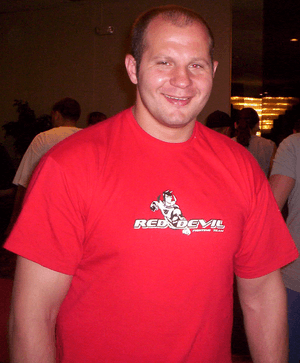 Fedor Emelianenko (born September 28, 1976) is a Russian mixed martial artist who is currently fighting for the strikeforce promotion. He has an overall record of 35 fights, in which he has won 31, lost 1, and had 1 no contest.

All content from Kiddle encyclopedia articles (including the article images and facts) can be freely used under Attribution-ShareAlike license, unless stated otherwise. Cite this article:
Fedor Emelianenko Facts for Kids. Kiddle Encyclopedia.