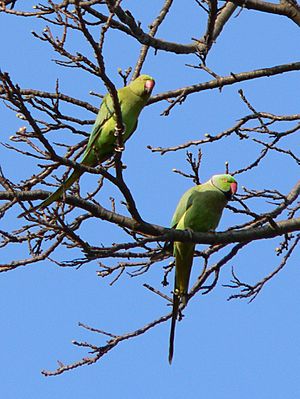 Feral parakeets in Great Britain are wild-living, non-native parakeets that are an introduced species into Great Britain. The population consists of rose-ringed parakeets (Psittacula krameri), a non-migratory species of bird native to Africa and the Indian Subcontinent. The origins of these birds are subject to speculation, but they are generally thought to have bred from birds that escaped from captivity.

The British parakeet population is mostly concentrated in suburban areas of London and the Home Counties of South-East England, and for this reason the birds are sometimes known as "Kingston parakeets" or "Twickenham parakeets", after the London suburbs of Kingston upon Thames and Twickenham. The parakeets, which breed rapidly, have since spread beyond these areas, and flocks have been sighted in other parts of Britain, such as a flock of around 20 to 30 settled in Victoria Park, Glasgow. Other separate feral parakeet populations exist in and around other European cities.

Origin of the birds 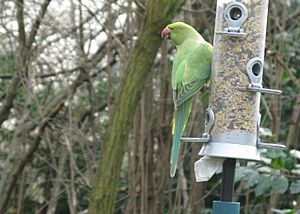 A parakeet on a bird feeder in Kensington Gardens, London

How exactly the parakeet population first came to exist and thrive in the wild in England is not known; however, a number of theories abound, most centred around a pair or more of breeding parakeets that escaped or were released from captivity some time in the mid-1990s, consistent with the first widespread photographs of the birds.

More specific introduction theories explaining the origin of the birds have also been published:

Despite the number of theories associated with film studios and musicians, most ornithologists believe that the original birds likely escaped from aviaries before 1971. In terms of geographic origin, the British birds are considered a hybrid population of two Asian subspecies, P.k. borealis and P.k. manillensis. 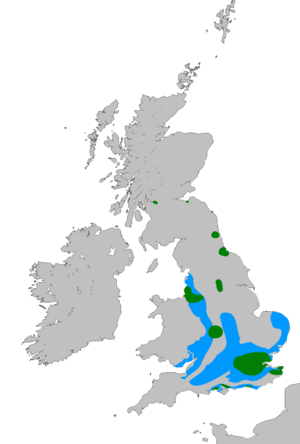 Despite the increase in notability and population size at the end of the 20th and beginning of the 21st centuries, escaped parakeets have been spotted in Britain since the 19th century. The earliest recorded sighting was in 1855 in Norfolk, and parakeets were also seen in Dulwich in 1893 and Brixton in 1894. 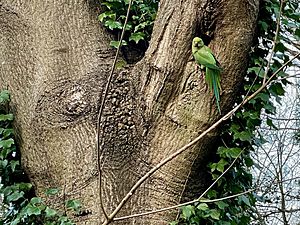 A parakeet outside its nest on Hampstead Heath

Throughout the decades since, parakeets continued to variously escape captivity; however, populations repeatedly died out until 1969, when the population of parakeets began to breed and sustain itself for the first time in London. Beginning in Croydon, the parakeets spread to Wraysbury, Bromley and Esher. The numbers remained very low, however, until the mid-1990s, when the population appeared to start increasing rapidly. The population was estimated at 500 in 1983, reached 1,500 by 1996, and 5,800 in the London area in 2002 (in up to 5 roosts).The last official roost count, in 2012, recorded 32,000 parakeets in London.

British parakeets are most common in the south-east of England, including London suburbs, Surrey, Kent and Sussex. Parakeet populations have also been reported further north in Liverpool, Oxford, Birmingham, Manchester, Sheffield, and Edinburgh.

Due to population growth and the relatively quick spread of parakeets throughout Britain, estimates of parakeet numbers within the country vary. According to the London Natural History Society in the early 2000s, the largest population was believed to exist in the South London suburbs, where, until 2007, the birds roosted principally in Esher Rugby Ground, Esher (Esher Rugby Club named its women's team "The Parakeets" in a tribute to the birds). The Royal Society for the Protection of Birds (RSPB) estimates there to be around 8,600 breeding pairs in Britain. Other scientific counts conducted in 2012 placed the number at around 32,000 birds.

Concerns have been raised by Dr Hazel Jackson, an expert in invasive species and conservation at the University of Kent, over the impact of the growing numbers of parakeets in south-east England. Scientific research programmes have analysed the behaviour of parakeets and found that they compete with native bird species and bats for food and nesting sites. Although not aggressive, parakeets have been shown to deter smaller birds due to their behaviour and noise; their large size means that they often crowd small bird feeders, further increasing competition for resources and disrupting local ecosystems.

The detrimental effect of competitive exclusion has been likened to the impact of the introduction of grey squirrel on the red squirrel. However, British parakeets are not without natural predators; ornithologists have observed an increase in the population of birds of prey in London, and have reported sparrowhawks, peregrine falcons and hobbies preying on parakeets.

Parakeets are considered a pest in many countries such as Israel, where large swarms of parakeets can have a devastating effect on certain crops, and there is concern that the rapidly growing parakeet population could have unforeseen environmental impact in Britain. In 2009, Governmental wildlife organisation Natural England added feral parakeets to the “general licence”, a list of wild species that can be lawfully culled without the need for specific permission. Feral monk parakeets (Myiopsitta monachus) are also covered by the licence. In March 2021, the Department for Environment, Food and Rural Affairs stated that no cull of the rose-ringed parakeet population in the UK is planned.

All content from Kiddle encyclopedia articles (including the article images and facts) can be freely used under Attribution-ShareAlike license, unless stated otherwise. Cite this article:
Feral parakeets in Great Britain Facts for Kids. Kiddle Encyclopedia.