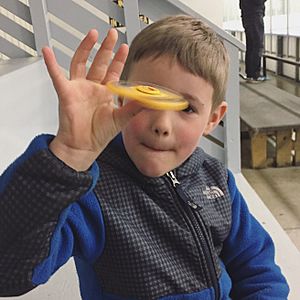 A fidget spinner is a toy that consists of a ball bearing in the center of a multi-lobed (typically two or three) flat structure made from metal or plastic designed to spin along its axis with very little effort. Fidget spinners became trending toys in 2017, although similar devices had been invented as early as 1993.

The toy has been promoted as helping people who have trouble focusing or those who may need fidget to relieve nervous energy, anxiety, or psychological stress. There are claims that a fidget spinner can help calm down people who have anxiety and other neurological disorders like ADHD and autism. However, as of May 2017, there is no scientific evidence that they are effective as a treatment for ADHD.

Fidget spinners are toys not unlike yo-yo or other skill toys, designed to spin with little effort. A basic fidget spinner usually consists of a two- or three-pronged design with a bearing in its center circular pad. However, the number of prongs may vary - some may have six or more. A person holds the center pad while the toy spins. They are made from various materials including brass, stainless steel, titanium, copper, aluminium, and plastic. The bearings are generally ceramic, metal (stainless steel or chrome), and some are hybrids—such as ceramic balls with stainless races and cages. Each fidget spinner also has two or more weights on the outside that make it spin faster and stay balanced. Bearings can vary to adjust for the design's spin time, vibration, and noise, causing unique sensory feedback.

Being a kind of a flywheel of a gyroscope in principle, fidget spinners come with similar effects enabling a player to pull various tricks and stunts while forces of a gyroscope take hold. A fidget spinner can be balanced on top of fingers, thrown and caught, and so on.

All content from Kiddle encyclopedia articles (including the article images and facts) can be freely used under Attribution-ShareAlike license, unless stated otherwise. Cite this article:
Fidget spinner Facts for Kids. Kiddle Encyclopedia.