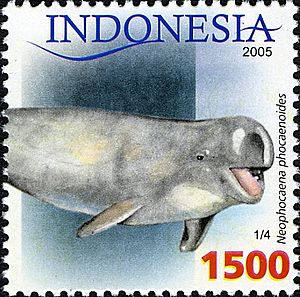 The Finless porpoise is a marine mammal. It is a species related to dolphins and whales. It lives in shallow water on the coast of Asia from the Persian Gulf to Japan. It also lives in Yangtze, Gan and Xiang rivers. Unlike other dolphins, it lacks a dorsal fin.

The finless porpoise lives in the coastal waters of Asia, especially around Japan, Korea, China, Indonesia, Malaysia, India, and Bangladesh. Throughout their range, the porpoises stay in shallow waters, up to 50 m (160 ft) deep, close to the shore, in waters with soft or sandy seabeds, or in estuaries and mangrove swamps. In exceptional cases, they have been encountered as far as 135 km (84 mi) off-shore in the East China and Yellow Seas, albeit still in shallow water.

Size compared to an average human

The finless porpoise is the only porpoise to lack a true dorsal fin. Instead there is a low ridge covered in thick skin bearing several lines of tiny tubercles. In addition, the forehead is unusually steep compared with those of other porpoises. With fifteen to twenty-one teeth in each jaw, they also have, on average, fewer teeth than other porpoises, although there is some overlap, and this is a not a reliable means of distinguishing them.

Finless porpoises can grow to as much as 2.27 m (7 ft 5 in) in length, and can weigh up to 72 kg (159 lb), although most are rather smaller. The flippers are moderately large, reaching up to 20% of the total body length. Adults are typically a uniform, light grey colour, although some may have lighter patches of skin around the mouth, or darker patches in front of the flippers. Newborn calves of the central and eastern subspecies are mostly black with grey around the dorsal ridge area, becoming fully grey after four to six months. However, newborn calves of the western subspecies are a light creamy grey, and become darker as they age. 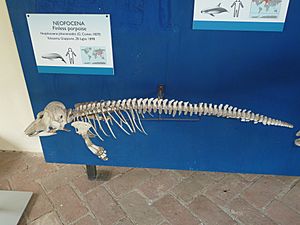 The anatomy of finless porpoises has been relatively well studied, compared with that of some other cetacean species. For example, the tubercles along the dorsal ridge are known to contain numerous nerve endings that may possess a sensory function. The auditory system also appears well-developed, with numerous large nerve fibres specialised for rapid communication between the ears and the brain. On the other hand, sight is relatively poor, with a reduced lens and a limited number of fibres in the optic nerve and to the muscles moving the eyes.

The skeleton is unusually light, accounting for only 5% of the total weight of the animal. There are between 58 and 65 vertebrae, about half of them in the tail, and with the first three cervical vertebrae fused into a single structure. There are ten to fourteen pairs of ribs in the chest, and an additional set of vestigial ribs has sometimes been reported in the neck, in association with the seventh cervical vertebra. There are 44 sets of spinal nerves.

The nasal passage contains nine or ten air sacs, which have a complicated structure, and are capable of sealing off all air within the passage. Behind these are an additional set of vomeronasal sacs. The trachea, however, is short, with only four cartilaginous rings. The stomach has three chambers, there is no caecum, and no distinct difference between the small and large intestines.

Finless porpoises are opportunistic feeders using various kinds of available food items available in their habitat, including fish, crustaceans, and cephalopods. They are reported to eat fish, shrimp and squid in the Yellow Sea/Bohai area and off Pakistan. In Japanese waters, they are known to eat fish, shrimp, squid, cuttlefish and octopuses. Seasonal changes in their diets have not been studied. They also apparently ingest some plant material when living in estuaries, mangroves, and rivers, including leaves, rice, and eggs deposited on vegetation. 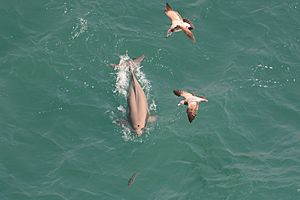 In Chinese coastal waters and the Yangtze River, finless porpoises are generally found in groups of three to six, although aggregations of up to about fifty have been reported. In Japanese waters, groups appear to be smaller, with pairs being typical, and even rare aggregations being no larger than thirteen individuals. Recent data suggest the basic unit of a finless porpoise pod is a mother/calf pair or two adults, and schools of three or more individuals are aggregations of these units or of solitary individuals. Social structure seems to be underdeveloped in the species, and the mother/calf pair is probably the only stable social unit.

Like other porpoises, their behaviour tends to be not as energetic and showy as that of dolphins. They do not ride bow waves, and in some areas appear to be shy of boats. In the Yangtze River, finless porpoises are known to leap from the water and perform "tail stands".

Finless porpoises make both high frequency clicking sounds, and longer, low frequency tones, the latter perhaps being for communication, rather than echolocation. The clicks are narrow-band, with peaks of over 100 kHz.

A new study from Woods Hole Oceanographic Institution (WHOI) study that was published in The Journal of Experimental Biology, "highlights the differences in dolphins' ability to hear across species, reshaping the previous 'one-size-fits-all' approach taken on the hearing ability of the cetaceans".

Breeding occurs in late spring and early summer.. The young are born in spring, summer, or winter, depending on the geographic locality, after a gestation period of ten to eleven months. Newborn finless porpoises are reported to 72 to 84 cm (28 to 33 in) in length. Males reach sexual maturity at four to six years of age, and females at six to nine years. Finless porpoises have lived up to 33 years.

It has been claimed that young calves cling to the denticulated area of skin on their mother's back and are carried by her as she swims, but there is no clear evidence of this happening. Calves are weaned at 6–15 months.

All content from Kiddle encyclopedia articles (including the article images and facts) can be freely used under Attribution-ShareAlike license, unless stated otherwise. Cite this article:
Finless porpoise Facts for Kids. Kiddle Encyclopedia.