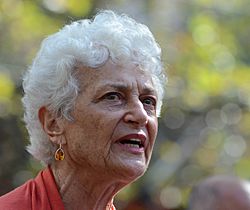 Fiona Juliet Stanley AC (born 1 August 1946) is an Australian epidemiologist. She is known for her public health work, her research into the health of mothers and children, and birth disorders such as cerebral palsy. In 1990, she was the founding director of the Telethon Institute for Child Health Research. Now called "Telethon Kids Institute", the institute helped show that folic acid before and during pregnancy can stop spina bifida in babies. She is a professor at the School of Paediatrics and Child Health at the University of Western Australia. She is also and the UNICEF Australian Ambassador for Early Childhood Development. She was named Australian of the Year in 2003.

Stanley was born in Little Bay, Sydney, New South Wales. Her family moved to Perth, Western Australia in 1956. She is married to Geoffrey Shellam. The couple have two daughters.

All content from Kiddle encyclopedia articles (including the article images and facts) can be freely used under Attribution-ShareAlike license, unless stated otherwise. Cite this article:
Fiona Stanley Facts for Kids. Kiddle Encyclopedia.