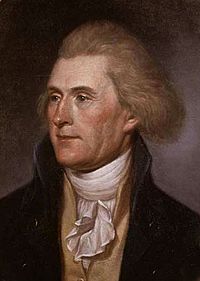 Thomas Jefferson before being president (1791)

It was the first presidential inauguration held in the United States's capitol, Washington, D.C. It was the beginning of Jefferson's first term as president and Aaron Burr as Vice President.

All content from Kiddle encyclopedia articles (including the article images and facts) can be freely used under Attribution-ShareAlike license, unless stated otherwise. Cite this article:
First inauguration of Thomas Jefferson Facts for Kids. Kiddle Encyclopedia.