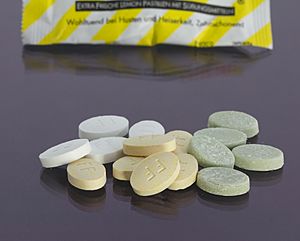 The image of the mid-water side trawler Cevic, that is found on all Fisherman's Friend products.

Fisherman's Friend is a brand of strong menthol lozenges manufactured by the Lofthouse company in Fleetwood, Lancashire, England.

Fisherman's Friend was originally developed by pharmacist James Lofthouse in 1865 to relieve various respiratory problems suffered by fishermen working in the extreme conditions of the Northern deep-sea fishing grounds. Though he developed it as an extremely strong liquid remedy containing menthol and eucalyptus oil, Lofthouse later made the liquid into small lozenges which were easier to transport and administer. According to the manufacturer, the fishermen began to refer to the lozenges as "friends", hence the name. British Prime Minister Margaret Thatcher is said to have used the product when her throat became strained from public speaking. French President Emmanuel Macron uses them too: 'He finds his energy in les Fisherman's, those lozenges which rip your throat out. He keeps them in his pockets and in the car-seats. When speaking publicly, he needs water, some slices of lemon and a small dish of Fisherman's. During the Presidential campaign, he literally devoured crates of them, delivered to his campaign headquarters.'.

The lozenges are relatively unchanged since their creation. The original paper packets later became foil-lined and packaged in a cardboard carton.

Lofthouse of Fleetwood Ltd. have won the Queen's Award to Industry for Export Achievement on three occasions.

Fisherman's Friends are available in a variety of flavours. Some flavours are sugar-free, for which the bags are striped.

Other types of candy

All content from Kiddle encyclopedia articles (including the article images and facts) can be freely used under Attribution-ShareAlike license, unless stated otherwise. Cite this article:
Fisherman's Friend Facts for Kids. Kiddle Encyclopedia.