Fitzgerald, also known as Fort Fitzgerald and originally Smith's Landing, is an unincorporated community in northern Alberta within the Regional Municipality of Wood Buffalo, located 15.4 kilometres (9.6 mi) south of the Northwest Territories border, and 23 kilometres (14 mi) southeast of Fort Smith. 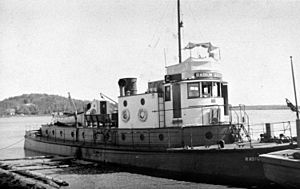 The Radium Queen, and other tugboats, pushed barges to and from the portage at Fort Fitzgerald to the railhead at Waterways, Alberta.

Prior to the extension of railway service to Hay River, Northwest Territories, on Great Slave Lake, all cargo being shipped to or from the north had to be portaged from Fitzgerald to Fort Smith, to avoid four impassable rapids. The community was known as Smith's Landing until 1915 when it was renamed Fort Fitzgerald after the late Francis Joseph Fitzgerald.

Most of the community's services are provided from Fort Smith, including fire, law enforcement, health care, social services, and telecommunications. Law enforcement is part of the Royal Canadian Mounted Police 'G division' in the Northwest Territories. Since telecommunication services, including cellular and internet, are from Fort Smith, Northwest Territories, the area code is 867, although Fitzgerald is located in what would be area code 780 in Alberta.

Fitzgerald has a subarctic climate (Köppen climate classification Dfc). Summers are short and warm, and winters long and cold.

All content from Kiddle encyclopedia articles (including the article images and facts) can be freely used under Attribution-ShareAlike license, unless stated otherwise. Cite this article:
Fitzgerald, Alberta Facts for Kids. Kiddle Encyclopedia.