Fort Smith was founded around the Slave River. It served a vital link for water transportation between southern Canada and the western Arctic. Early fur traders found an established portage route from what is now Fort Fitzgerald on the western bank of the Slave River to Fort Smith. This route allowed its users to navigate the four sets of impassable rapids (Cassette Rapids, Pelican Rapids, Mountain Rapids, and Rapids of the Drowned). The portage trail had been traditionally used by local aboriginal people for centuries.

The aboriginal population of the region shifted as the fortunes of the tribes changed. By 1870, Cree had occupied the Slave River Valley. The Slavey had moved north by this time and the Chipewyan had also begun moving into the area.

Peter Pond of the North West Company was the first white trader to travel on the Slave River and make contact with aboriginal people in this region. He established a post on Lake Athabasca called Fort Chipewyan in the 1780s, at the head of the Slave River. 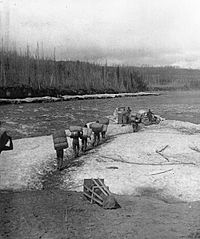 Portage on the Slave River circa 1900 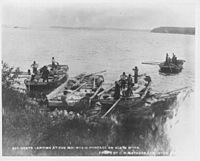 Boats landing at Mountain Portage on the Slave River circa 1900 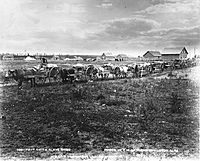 The fur trade penetrated deeper into the Mackenzie River district in the 19th century dominated by the activities of the Hudson's Bay Company. York boats were used to run the Slave River rapids and where needed small portages were established to bypass the most dangerous areas. Nonetheless, serious mishaps were bound to happen, and the section of the Slave River became known as 'The Rapids of the Drowned'. In 1872, the Hudson's Bay Company built an outpost called Smith's Landing at the most southern set of the Slave River rapids. In 1874, another outpost was constructed at the most northern set of rapids. It was called Fort Smith. Both posts were named in honour of Donald Alexander Smith.

In 1876, the Roman Catholic Mission was moved from Salt River to Fort Smith while the community was prospering.

In 1911, government was established in Fort Smith when Ottawa sent an Indian agent and a regional medical doctor, and the Royal Northwest Mounted Police opened a detachment. With these developments, Fort Smith became not only the transportation centre for the Western Arctic but the administrative centre as well.

The mission sawmill produced lumber for the first hospital, St. Anne's, built in 1914 for the Grey Nuns. The sawmill also supplied the lumber for the first school built in 1915. Also maintained by the Roman Catholic Mission was St. Bruno's Farm that supplied produce, meat, and dairy products. Until it was closed in the 1920s, the farm supplied all the church's missions in the western Arctic. It maintained a herd of more than 140 cattle.

Horse-drawn freight services were complemented by tractors in 1919, when the Alberta & Arctic Transportation Company commission two 75-horsepower (56 kW) tractors on the Slave River portage to haul commercial freight from one side of the rapids to the other.

With the discovery of oil at Norman Wells in 1920, a federal government administration building was constructed to house the new Northwest Territories branch and the first court of justice in the Mackenzie District. The first bank opened in Fort Smith in June 1921.

SS Distributor was launched in 1920 by the Lamson & Hubbard Trading Company to service its trading posts along the Mackenzie River. This group was taken over by the HBC in 1924. By the 1930s, a significant part of the Fort Smith economy was centered around ship and barge building with the HBC and Northern Transportation Company Limited (NTCL) establishing shipyards below Fort Smith.

Wood Buffalo National Park was established in 1922 with its operations and administration headquarters in Fort Smith.

In 1925, Fort Smith received the first Royal Canadian Corps of Signals air radio station in the Northwest Territories. An airport was later built in 1928.

The discovery of gold in Yellowknife in 1938 also represented an economic boost to Fort Smith as many prospectors came passing through. In the same year, an Anglican Mission house was built and a church was added in 1939.

In 1942–1943, Fort Smith played its own small part in the war effort when huge armies raged across the globe in the Second World War. With a population of 250, Fort Smith hosted 2,000 US Army soldiers who were en route to the Canol Oil Pipeline Project at Norman Wells (see Canol Road). They brought hundreds of barge loads of supplies; and in order to move these, they built a tractor road from Fort Smith to Hay River and even farther north.

The continued gold fever that fuelled Yellowknife's growth also allowed Fort Smith's population to grow five-fold in the decade following 1945. This was reflected in the increase in government administrative facilities and the growth of its role as a transportation hub for the Mackenzie District.

Fort Smith was incorporated as a village in 1964; two years later, with a population of 2,130, the village became a town on October 1, 1966. The all-weather road to Hay River was officially completed in 1966 as well, permanently linking Fort Smith to the south.

The completion of a southern rail link to Hay River in 1964 meant that Fort Smith's role as the transportation hub was largely negated; and, subsequently, shipping operations on the Slave River ceased in 1968.

On Friday August 9, 1968, disaster struck Fort Smith when a landslide some 3,300 by 990 feet (1,010 by 300 m) broke away from the riverbank causing property damage and killing one person. The riverbank area has since been sloped to stabilize it; and now the gentle hillside is known as the Riverbank Park, complete with groomed trails, picnic areas, and a viewing platform where one can see the Rapids of the Drowned.

In 1970, the Adult Vocational Training Centre was opened. Its operations were later expanded and in 1981 it became Thebacha College. A few years later, Arctic College was created by the government of the Northwest Territories and the Thebacha Campus was also home to the headquarters offices. In 1995, the college changed its name to Aurora College to allow Nunavut the use of the Arctic College name.

Today, Fort Smith's economy is based on the federal, territorial, and aboriginal governments along with education and tourism. In 2008, there was some interest in re-establishing a portage route to supply the Fort McMurray oilsands operations.

Fort Smith is accessible all year long via the Fort Smith Highway. A winter road operates for several months to connect Fort Smith to Fort Chipewyan and from there to Fort McMurray. An all-weather road named Pine Lake Road links Fitzgerald.

Fort Smith is the home of the Northern Life Museum and home of the museum ship Radium King.

Every year the South Slave Friendship Festival, a music and arts festival, occurs in Fort Smith, usually in August. Musicians and artists from across the Northwest Territories and many other faraway places come to interact with other artists and show off their talents to the public.

Many tourists come to see the world-class Slave River and many kayakers try its rapids.

Fort Smith Mission Park is a popular tourist attraction featuring historic buildings and a grotto from the Oblate Catholic Mission.

In the summer months, pelicans can be seen nesting on the various rapids near Fort Smith. Whooping cranes, an endangered species, also nest in the area during the summer and can be viewed via air charters as ground access is prohibited.

All content from Kiddle encyclopedia articles (including the article images and facts) can be freely used under Attribution-ShareAlike license, unless stated otherwise. Cite this article:
Fort Smith, Northwest Territories Facts for Kids. Kiddle Encyclopedia.