Five Mile Point Light, also known as Five Mile Point Lighthouse or Old New Haven Harbor Lighthouse, is a U.S. lighthouse in Long Island Sound on the coast of New Haven, Connecticut. Located at the entrance to New Haven Harbor, the beacon's name derives from its proximity to Downtown New Haven, about five miles (8 km) away. The original lighthouse consisted of a 30-foot (9.1 m) octagonal wooden tower built in 1805 by Abisha Woodward. In 1847, a new 80-foot (24 m) octagonal tower was constructed by Marcus Bassett with East Haven brownstone. This new beacon was illuminated by 12 lamps with reflectors which were positioned 97 feet (30 m) above sea level. Also constructed at this time was a two-and-one-half story brick house which supplanted the previous, deteriorating keeper's dwelling. A fourth-order Fresnel lens replaced the lamps in 1855 and a fog bell was added in the 1860s. The Five Mile Point Light was deactivated in 1877 when the nearby Southwest Ledge Light was completed. Currently, the lighthouse is contained within Lighthouse Point Park and, along with the keeper's house, was listed on the National Register of Historic Places in 1990.

During the American Revolutionary War in July 1779, a battle took place on the site of the future lighthouse when British troops anchored offshore and staged an invasion of New Haven. Patriot forces launched a defense of the beachfront as the attackers landed their boats. Ensign and Adjutant Watkins of the King's American regiment was the first of the British soldiers killed in the skirmish, shot while attempting to disembark on the shoreline. He was buried close to where the lighthouse at Five Mile Point would eventually be erected a few decades later. Although the British went on to burn the nearby house of Amos Morris and several other residences in the area, they suffered heavy losses and ultimately abandoned their advance on New Haven.

In 1804, the United States Congress passed a statute requiring the secretary of the treasury to build a lighthouse at Five Mile Point if land could be obtained for a reasonable price. That same year, Amos Morris, Jr., son of the man whose home was the first to be razed during the 1779 British invasion, sold a suitable one-acre plot of his father's coastal estate to the federal government for $100. On March 16, 1805, an appropriation for $2500 was issued for the construction of the lighthouse. Late that year, a 30-foot (9.1 m) octagonal wooden tower was built by Abisha Woodward on the southwest edge of the harbor and to mark the path around the Southwest Ledge. The fixed white light was made by eight oil lamps with 13 inches (33 cm) parabolic reflectors, but it was criticized for being too dim. The lighthouse also had a keeper's quarters constructed in 1805. The first keeper of the light was Amos Morris Jr., for a period of just three weeks. An 1832 report noted that the light was 50 feet (15 m) above the water and that its visibility had been improved with the removal of some trees. In 1838, Lieutenant George M. Bache reported that the wooden tower and keeper's house was in a poor state. Congress would appropriate $10,000 to construct a new stone lighthouse on March 3, 1847. 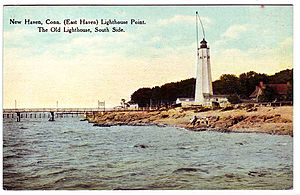 Constructed in 1847, the new 80-foot (24 m) octagonal tower was constructed by Marcus Bassett with East Haven brownstone from Jabez Potter's quarry. The interior of the lighthouse was lined with New Haven brick and a 74-step granite stairway leads to the cast-iron lantern. The light was powered by 12 lamps with reflectors and was located 97 feet (30 m) above sea level. Also constructed was a new two-and-one-half story brick house to replace the one in a "very bad state of repair". The light would be replaced with a fourth-order Fresnel lens in 1855. In the 1860s, a fog bell was also added.

The lighthouse was extinguished in 1877 when the offshore Southwest Ledge Light replaced it for navigation. The keeper, Elizur Thompson, went to be the Southwest Ledge Light's keeper for five years before returning to live in the Five Mile Point Light keeper's quarters and fly storm signal flags for the United States Weather Bureau. In 1896, the lighthouse was transferred to the United States Department of War and was improved by a leasee named Albert Widmann. In 1922, the property was split up, with the land given to the state of Connecticut and the buildings to the city of New Haven. Two years later, New Haven purchased the land from the state for $11,180. The tower was renovated in 1986. The $86,000 restoration included repairing cracked mortar, steam cleaning the interior and exterior and removing "guano [that had] accumulated over the decades".

Roth and Clouette note that the "Five Mile Point Lighthouse is significant because it embodies the distinctive characteristics of American lighthouse construction during the first half of the 19th century ... [it] is also significant in the maritime history of New Haven." The keeper's dwelling currently is a private residence for New Haven Recreation Department personnel and has been modified with the addition of a porch. The lighthouse and the keeper's residence were listed on the National Register of Historic Places in 1990.

All content from Kiddle encyclopedia articles (including the article images and facts) can be freely used under Attribution-ShareAlike license, unless stated otherwise. Cite this article:
Five Mile Point Light Facts for Kids. Kiddle Encyclopedia.