Flandreau FLAN-droo is a city in and county seat of Moody County, South Dakota, United States. The population was 2,372 at the 2020 census. It was named in honor of Charles Eugene Flandrau, a judge in the territory and state of Minnesota. He is credited with saving the community of New Ulm, Minnesota, from destruction during the conflict with the Sioux tribe in 1862.

There were 973 households, of which 29.4% had children under the age of 18 living with them, 39.6% were married couples living together, 12.8% had a female householder with no husband present, 7.5% had a male householder with no wife present, and 40.1% were non-families. 34.5% of all households were made up of individuals, and 15.8% had someone living alone who was 65 years of age or older. The average household size was 2.35 and the average family size was 3.00.

The British established a Hudson's Bay Company trading post in 1763 near present-day Flandreau. 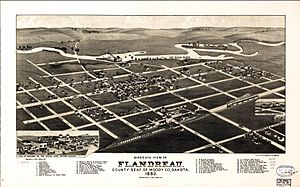 The town of Flandreau, or possibly Flandrau, was originally settled in 1857, and named for U.S Indian Agent Charles E. Flandrau. The settlement, like others in the region was abandoned within a year, as a result of threatening activities of the Yankton Sioux. In 1869, the town was resettled by twenty-five families of Christianized Sioux from the Santee reservation. White settlement resumed in 1872. When Moody County was organized in 1873, Flandreau was made the county seat. Richard F. Pettigrew of Sioux Falls, a relative of Pettigrew settlers in Flandreau, made the establishment of an Indian School at Flandreau part of his successful 1889 campaign for the U.S. Senate; the Riggs Institute was opened in 1892 and is today known as the Flandreau Indian School.

Flandreau School District 50-3 is the local public school district operated by the state.

Flandreau Indian School is in the area.

All content from Kiddle encyclopedia articles (including the article images and facts) can be freely used under Attribution-ShareAlike license, unless stated otherwise. Cite this article:
Flandreau, South Dakota Facts for Kids. Kiddle Encyclopedia.