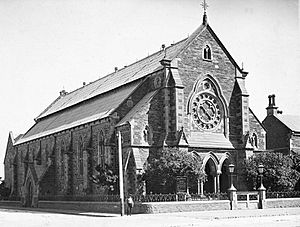 In response to a call by George Fife Angas for a Baptist minister to found a new church in Adelaide, Rev. Silas Mead emigrated aboard Parisian, arriving in July 1861. He began taking regular services at White's Rooms and soon his enthusiastic congregation decided to build a large church on Acre 273 in Flinders Street on the west corner of Divett Place.

Robert G. Thomas, the architect who would later be responsible for the Stow Memorial Church (now Pilgrim Uniting Church), was selected to design the building, which is of Gothic revival style in bluestone and sandstone with elaborate capitals on the columns, a rose window and front entrance with three arches supported by pillars.

The Australian Baptist Missionary Society was formed at the church under Rev Silas Mead in 1864, and the first missionary, Ellen Arnold, sent from there in 1882.

All content from Kiddle encyclopedia articles (including the article images and facts) can be freely used under Attribution-ShareAlike license, unless stated otherwise. Cite this article:
Flinders Street Baptist Church Facts for Kids. Kiddle Encyclopedia.