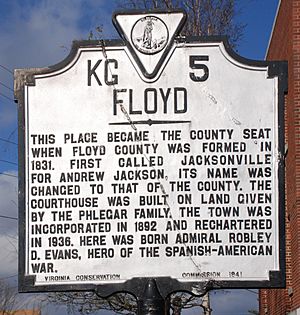 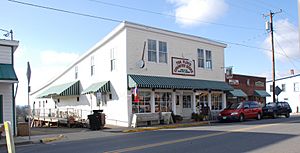 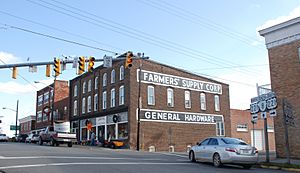 Hardware store at the main intersection

Floyd is a town in Floyd County, Virginia, United States. The population was 425 at the 2010 census. It is the county seat of Floyd County. The Town of Floyd was originally named Jacksonville as the surrounding county was formed during the tenure of President Andrew Jackson. The name was subsequently changed to Floyd for Virginia governor John Floyd.

According to the United States Census Bureau, the town has a total area of 0.5 square miles (1.2 km²), all of it land.

There were 238 households out of which 18.5% had children under the age of 18 living with them, 34.0% were married couples living together, 12.6% had a female householder with no husband present, and 50.8% were non-families. 49.6% of all households were made up of individuals and 31.1% had someone living alone who was 65 years of age or older. The average household size was 1.82 and the average family size was 2.57.

The Town of Floyd is becoming known as a regional destination for music, especially bluegrass music, and old-time music. The Floyd Country Store's Friday Night Jamboree, which features local and area bands, has been held each Friday night for many years, gaining in popularity during the past decade. In fair weather, the indoor stage performances and dancing are joined by simultaneous banjo-and-fiddle-centered jam sessions in driveways and seating areas along South Locust Street. Floyd is also home to a very large counter-culture movement. There are other musical venues and stages in the town, featuring many different styles of music. The Winter Sun, a complex in downtown Floyd, frequently hosts shows for bands. Floyd is also home to an increasing amount of classical music, including the National Music Festival, which will host its first season in Floyd in 2011. The Town also is home to County Sales, a notable music distribution company founded by David Freeman focusing on old-time, bluegrass and related music.

Floyd is also becoming a popular location for film production. In the fall of 2013, a low-budget romantic comedy written and directed by Mike Kravinsky was filmed in Floyd.

The climate in this area is characterized by hot, humid summers and generally mild to cool winters. According to the Köppen Climate Classification system, Floyd has a humid subtropical climate, abbreviated "Cfa" on climate maps.

All content from Kiddle encyclopedia articles (including the article images and facts) can be freely used under Attribution-ShareAlike license, unless stated otherwise. Cite this article:
Floyd, Virginia Facts for Kids. Kiddle Encyclopedia.