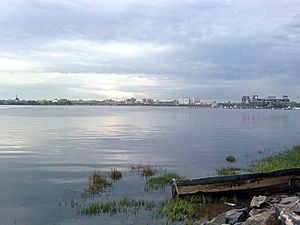 Looking east at Flushing Bay from the promenade near LaGuardia Airport.

Flushing Bay is a tidal embayment in New York City. It is located on the south side of the East River and stretches to the south near the neighborhood of Flushing, Queens. It is bordered on the west by LaGuardia Airport and the Grand Central Parkway, on the south by Northern Boulevard, and on the east by the neighborhood of College Point. The Flushing River empties into the bay at its southeast corner. A 150-foot-wide navigational channel (46 m) dredged at a depth of 14 feet (4.3 m) runs along much of the bay's length.

Flushing Bay was an important source of food for the Matinecock tribe of Native Americans and early European settlers, providing fish, shellfish, and waterfowl. After the American Civil War, the area surrounding the bay became waterfront resort for the wealthy. The World's Fair Marina, constructed for the 1964 New York World's Fair, is located on the southern end of the bay beside the East Elmhurst neighborhood. The marina is part of Flushing Meadows–Corona Park and it is bordered by the 1.4-mile-long (2.3 km) Flushing Bay Promenade.

On September 21, 1776, the Colonial patriot Nathan Hale was captured by the British Army near a tavern at Flushing Bay after being fingered as a spy. He was hanged the next day on Manhattan Island.

The Williamsburgh Yacht Club is located on the east side of Flushing Bay in College Point. It was established in Brooklyn in 1865, but then the yacht club moved to North Beach (now part of the LaGuardia Airport) in 1896.

The New York City Department of Sanitation North Shore Marine Transfer Station is located in College Point on the eastern shore of Flushing Bay. From 1954 to 2001, this site was used to transfer garbage from trucks to barges. A new marine transfer station at this location was under construction as of January 2012.

On March 5, 2015, Delta Air Lines Flight 1086 skidded off the runway at LaGuardia Airport and stopped a few feet away from Flushing Bay. 24 people were injured and the aircraft was damaged.

The present shoreline of Flushing Bay has been largely altered by the development of LaGuardia Airport. Before the airport opened in December 1939, millions of cubic yards of landfill were added to the western shoreline of the bay to create space for runways. In 1966, the Port Authority extended the northern end of Runway 4 (or 22) by 2,000 feet (610 m) and the western end of Runway 13 (or 31) by 1,500 feet (460 m) by constructing a 50-acre (20 ha), pile-supported concrete deck over parts of Flushing Bay, including the Rikers Island Channel. In the 1990s, about 20 acres (8 ha) of Flushing Bay were filled in to create an overrun at the eastern end of Runway 13 (or 31). To offset the loss of wetlands, new wetlands were constructed adjacent to the airport in Flushing Bay and in Little Neck Bay.

Concerns have arisen given the proximity to a flight path into LaGuardia Airport, although the government of New York City has stated that the design includes adequate safeguards to prevent the facility from attracting flocks of birds that might be harmful to airliners.

All content from Kiddle encyclopedia articles (including the article images and facts) can be freely used under Attribution-ShareAlike license, unless stated otherwise. Cite this article:
Flushing Bay Facts for Kids. Kiddle Encyclopedia.