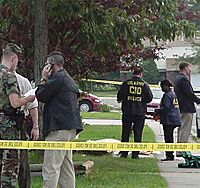 Forensic science (or forensics) is when different fields of science work together to answer the questions a lawyer would ask. Most often, forensics is about proving that someone was present at a place where a crime was committed. Specialists take samples which are later analyzed in a laboratory. Most forensic tests can take from 1 hour to one year, and investigators need to double (and triple) check the answer, so they know that the answer is the right answer. If a forensics team made a mistake the wrong person could be jailed, or they could get into trouble themselves.

Samples commonly taken include fingerprints. People also look for other things that could be used, for example a few hairs (or pieces of skin). Samples like hair or skin can be use for DNA testing, which allows to tell the gender of the person the hair is from, amongst others.

When someone is accused of committing the crime, these pieces of evidence can then be matched up. Then, if they are correct, the person is charged.

All content from Kiddle encyclopedia articles (including the article images and facts) can be freely used under Attribution-ShareAlike license, unless stated otherwise. Cite this article:
Forensic science Facts for Kids. Kiddle Encyclopedia.