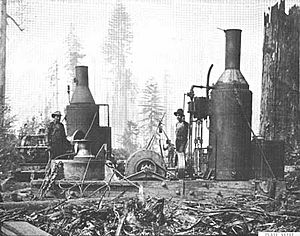 Fort Dick (Tolowa: Mvn-des-chuu-dvn) is a small unincorporated community in rural Del Norte County, California. Fort Dick is around five miles (eight kilometers) north of Crescent City, California, and around 15 mi (24 km) south of the California–Oregon state line. Its population is 912 as of the 2020 census, up from 588 from the 2010 census.It is located on the U.S. Route 101 corridor on the Redwood Coast. A post office was set up in 1917.

Fort Dick Landing dates back to the Civil War era and was named after a settler's log house "fort" built by whites to defend from the Indians. In 1888 a shake and shingle mill was moved there and the place renamed Newburg by the Bertsch brothers who owned the mill. With the establishment of the post office in 1896, the old name was revived.

The heavily forested coast territory surrounding Fort Dick was occupied and used by the Tolowa and Yurok tribes of Native Americans.

Historical records state that a party travelling with Jedediah Smith entered the area of Fort Dick and skirted the eastern edge of Lake Earl between June 14 to 16, 1828. During this time, not only did they explore the area, but they made clear contact, including trading and engaging in commerce with the Tolowa Indians on the 15th. Jedidiah Smith's party "skirted" the eastern shore of Lake Earl. Since his party was there in 1828, it predates the events that led the settler or farmer who owned the land called "Russell's Prairie" (later Fort Dick) by about twenty-five to thirty years.

"On June 14 the company pushed up the beach until they struck a 'low neck of land running into the sea where there was plenty of clover and grass for our horses' and camped. The trappers, during the day's march, had been compelled to take to the sea for several hundred yards at a time, 'the swells some times would be as high as the horses backs.' The company remained on the south bank of Elk Creek on the 15th, while several hunters went out. One of them killed a buck elk, 'weighing 695 lbs., neat weight.' A number of Tolowa came in, bringing fish, clams, strawberries, and camas roots, which were purchased.

The company rode out early on the 16th. Striking to the north northwest, they crossed a neck of land skirting the ocean. Considerable difficulty was encountered in getting the horses across Elk Creek, and they were compelled 'to make a pen on the bank to force them across.' The Mountain Men on the 16th camped on the wooded flats south of Lake Earl. Skirting the eastern margin of Lake Earl, the trappers camped three nights in Section 27, between the lake and Kings Valley."

The camp site of June 14 was on Elk Creek, one-fourth of a mile west of the junction of U.S. 101 and the Elk Valley road. Exactly one month later, while eating breakfast the morning of July 14, 1828, Jedidiah's party was attacked by at least one hundred Native American Indians. Everyone in the party except for Jedidiah and two companions died in the ambush. They escaped and headed directly to Fort Vancouver.

The coastal waters near Crescent City and north are notoriously treacherous. Over the years, there have been many ships that sunk in the ocean close to Fort Dick and Crescent City.

A civil war era letter indicates the existence of several roads heading to Crescent City; however, there is specific mention of a "Fort Dicks Road"[where?]. The Union Quartermaster Swasey, who had written the letter, suggested it as the preferred path to travel north. Apparently, other roads existed at the time but were fraught with peril during times when the rivers were high.

Fort Dick during the Civil War

Perhaps it is best noted that the area now known as Fort Dick was once used by indigenous peoples of the region in the normal way they used any land.

Due to continuous unrest between the white settlers and the Native Americans, the military was eventually called in, at the bequest of the Department of Indian Affairs, in 1862 to establish a military presence on the site known as Fort Dick in 1862. The letters written during the Civil War were compiled and published in the 1890s by the Secretary of War.

While the civil war raged in the eastern United States, there was a very active military presence of Union Soldiers building and summarily dismantling rough military outputs, camps, and forts that dotted northern California. It is in this context that there was an order sent out to establish a military settlement to keep peace between the settlers at Crescent City and the Native American populations in a reservation near the city.

Two nations that are currently the closest are the Tolowa and the Yurok Nations. The federal government forced the large band of Yurok peoples onto a reservation they formed in 1855.

This region experiences warm (but not hot) and dry summers, with no average monthly temperatures above 71.6 °F. According to the Köppen Climate Classification system, Fort Dick has a warm-summer Mediterranean climate, abbreviated "Csb" on climate maps.

All content from Kiddle encyclopedia articles (including the article images and facts) can be freely used under Attribution-ShareAlike license, unless stated otherwise. Cite this article:
Fort Dick, California Facts for Kids. Kiddle Encyclopedia.