Brother Jonathan was a paddle steamer that struck an uncharted rock near Point St. George, off the coast of Crescent City, California, on July 30, 1865. The ship was carrying 244 passengers and crew, with a large shipment of gold. Only 19 people survived, making it the deadliest shipwreck up to that time on the Pacific Coast of the United States. Based on the passenger and crew list, 225 people are believed to have died. Its location was not discovered until 1993 and a portion of the gold was recovered in 1996.

The ship was commissioned by Edward Mills, a New Yorker who tried to operate a shipping business during the California Gold Rush, and was named after Brother Jonathan, a character personifying the region of New England. When built in 1851, it was 220 feet 11 inches (67.34 m) long and 36 ft (11 m) wide. Its route was from New York to Chagres, Panama, and on its first journey set a record for the then-fastest round-trip – 31 days. Passengers would cross the Isthmus of Panama and make their way north to California via another ship.

In 1852 the ship was purchased by Cornelius Vanderbilt, who operated a competing line, to replace one of his ships that had been wrecked. Vanderbilt had Brother Jonathan sail around Cape Horn and used it on the Pacific side of the route. Vanderbilt also had the steamer modified to accommodate more passengers. 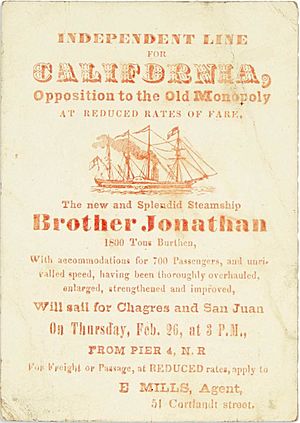 Vanderbilt's company had had an exclusive contract ferrying passengers across the isthmus through Nicaragua, but in 1856 the Nicaraguan government cancelled the agreement. The ship was then sold to Captain John Wright, renamed Commodore and put on West Coast routes, including from its new home port of San Francisco to British Columbia, as gold prospectors travelled to the Fraser Canyon Gold Rush.

The ship played a small but symbolic role in the history of the state of Oregon. After President James Buchanan signed the bill admitting Oregon to the Union on February 14, 1859, the news was wired to St. Louis, carried by stagecoach to San Francisco, and loaded on Commodore on March 10. On March 15, the ship docked in Portland, delivering the official notification of statehood to the people of Oregon.

By 1861, the ship had fallen into disrepair and was sold again to the California Steam Navigation Company, who retrofitted it, restored the original name of Brother Jonathan, and kept it on the northward route from San Francisco to Vancouver via Portland, allowing prospectors to work the Salmon River Gold Rush. Over the next several years, the vessel gained a reputation as being one of the finest steamers on the Pacific Coast, being the fastest ship to make the run, sixty-nine hours each way.

However, in the summer of 1865 the ship suffered a collision with a barkentine on the Columbia River, damaging the hull. Captain Samuel DeWolf, who had just assumed command of the vessel in June, recommended that the ship be repaired in dry dock, but the company performed the repairs while still in the water, as there was so much business that a backlog of cargo began to form.

On its last voyage, the ship had been heavily loaded and according to DeWolf's widow, he felt that the ship sat too low in the water, even without the passengers, but he was told that if he did not set sail, he would be fired and replaced by someone else. When it came time to depart, the bottom of the ship had sunk into the mud and they had to wait until high tide for a tugboat to pull her out. However, later historians determined that the actual load was no more than 700 tons, well below its 900-ton carrying capacity.

Within hours of leaving San Francisco Bay for Portland and Victoria, British Columbia, it ran into a gale. Most of the passengers became seasick and stayed in their cabins. Early on Sunday morning, July 30, 1865, the steamer anchored in Crescent City harbor on the first leg of its trip. After leaving the safety of the bay that Sunday afternoon, the ship encountered more stormy conditions. The seas were so bad near the California-Oregon border that the captain ordered the ship turned around for the harbor of Crescent City. Fifty-five minutes later on that return and close to port, the ship struck a rock, tearing a large hole in the hull. A heavy ore crusher had been loaded in the cargo hold directly above the repaired portion of the hull and smashed through it as well. Within five minutes, the captain realized the ship was foundering and ordered the passengers and crew to abandon ship.

Although there were enough lifeboats to hold all of the people on board, only three boats could be deployed. Acts of courage and desperation, fear and self-sacrifice, were numerous. The rough waves capsized the first lifeboat that was lowered and smashed the second against the vessel's sides. Only a single surfboat, holding eleven crew members, five women, and three children, managed to escape and make it safely to Crescent City. Four boats in the harbor tried to reach the sinking ship but were forced to turn back by the storm.

Among the victims were:

For its final voyage, crates of gold coins had been loaded on the vessel, including the annual treaty payments in gold for Indian tribes, Wells Fargo shipments consigned for Portland and Vancouver, and gold carried on board by the passengers. A large ship's safe safeguarded jewelry, more gold coins, and gold bars. The gold alone was valued at $50 million in today's dollars. Divers and ships began searching for the sunken treasure two weeks after the disaster, but despite the attempts of numerous people, for over 125 years, the ship's treasure of gold and artifacts were not found, although a fisherman in the 1930s claimed to have found 22 pounds (10.0 kg) of gold bars from the wreck in his nets. As it was illegal to own gold bars at the time, he kept the discovery a secret until 1974 when he sold them. 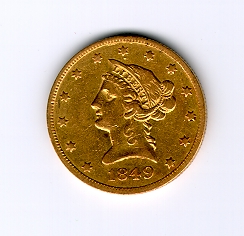 A coin that went down with the ship.

Despite the fact that Brother Jonathan sank just 8 miles (13 km) from Crescent City, the storms, rocky passageways, underwater currents, and underwater darkness prevented it from being found. Technology needed to improve and explorers had to change their assumptions before the ship could be found. On the last day of their 1993 expedition, men involved with Deep Sea Research (DSR) decided that the ship had drifted underwater to hit bottom 2 miles (3 km) from where it smashed into the rock. Led by Donald Knight (whose father had found a piece of the wreckage), and under risky conditions, a mini-sub on October 1, 1993, discovered the ship in the predicted location. Over time, the team began to bring artifacts back from a depth of 275 feet (84 m).

While recovery efforts were being conducted, lawsuits flew around among the salvors, the State of California, and numismatic experts. California took the legal position that it owned the rights to the wreck and everything located close to its shores. As the state had enacted a broad law granting it these rights to "historical shipwrecks", it fought the salvor's claims of ownership. Although every judge along the way disagreed with California's position, a number of states with similar interests joined in the legal battle. Finally, the U.S. Supreme Court in 1998 unanimously held that existing federal law held precedence, declared the state's law(s) unconstitutional, and ruled for the salvors. However, California officials told DSR that they would take the fight up again to the Supreme Court on the facts, and the state received 20 percent of the recovered gold in a final settlement, as well as ownership of the wreck itself.

In the first legally-recognized sale of all of the salvors' gold discovered from a sunken treasure ship, more than 500 bidders attended the auction of DSR's gold coins on May 29, 1999, in Los Angeles. The sale of its 1006 coins fetched a total of $6.3 million. 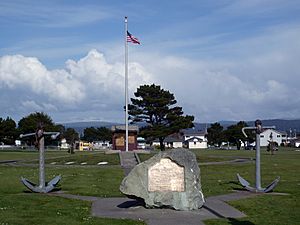 The Brother Jonathan Cemetery and Memorial in Crescent City, California

As a result of the shipwreck, laws were passed to improve passenger-ship safety, including the ability of lifeboats to be launched from a sinking ship.

It also resulted in approval to build the St. George Reef Lighthouse, though construction was not completed until 1892.

A memorial for the deceased, registered as California Historical Landmark No. 541, sits at Brother Jonathan Vista Point in Crescent City. The shipwreck is listed in the National Register of Historic Places.

Deep Sea Research set up a conservation lab for the recovered artifacts that was run by the local historical society in Crescent City, the Del Norte County Historical Society. The salvors also hired national experts including numismatists Robert R. Johnson, Ronald F. Umile, and Konstantin Balter to work with the volunteers in these efforts. This small historical society has been refurbishing and maintaining the artifacts, as well as having an exhibit on Brother Jonathan's demise and a variety of the objects that were reclaimed. The ship's wheel can be found in a restaurant in Portland.

Despite the gold coins already discovered and brought up, crates of gold from Brother Jonathan still remain hidden and undisturbed. The large safe with its millions of dollars of jewels, gold bars, and gold was never found. The salvors estimate that four-fifths of the treasure is still waiting to be discovered—mere miles from land.

In 2010, folk music singer-songwriter John Donovan released an album entitled Bells Will Ring, a line from his song about the shipwreck entitled "Brother Jonathan".

On the 150th anniversary of the shipwreck, the Idaho Civil War Round Table held a special commemorative program honoring the victims and survivors of the tragedy where the Brother Jonathan 150th anniversary website was unveiled.

All content from Kiddle encyclopedia articles (including the article images and facts) can be freely used under Attribution-ShareAlike license, unless stated otherwise. Cite this article:
Brother Jonathan (steamer) Facts for Kids. Kiddle Encyclopedia.