Fort Sully was one of the main military posts located on the east bank of the Missouri river in central Dakota built for use in the Indian Wars. There were two forts named Sully—old Fort Sully, which was in existence and occupied from 1863 to 1866, and the later, or new Fort Sully, which was established in 1866 and was continuously occupied as a military fort until its abandonment in the fall of 1894. 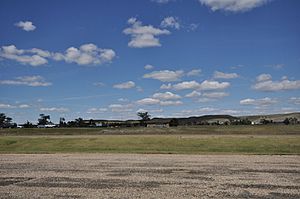 A portion of the command of General Sully in the campaigns of 1863-4 and 1865 against the Sioux was garrisoned at old Fort Sully. It was abandoned in the fall of 1866 on account of Its unhealthful location on the lowlands of the Missouri. Today the site is located within the Farm Island State Recreation Area.

On the 13th day of October it was pronounced ready for a company, and its garrison marched in; headquarters and three companies of the Thirtieth Wisconsin; three companies of the Sixth and three of the Seventh Iowa Cavalry, all under the command of Lieutenant Colonel E. M. Bartlett of the Thirtieth Wisconsin, who, in his order assuming the command, announces that the post is to be known as Fort Sully, "in compliment to our brave commander, Brigadier General Alfred Sully, U. S. Volunteers, now commanding the District of Iowa and Dakota."

Treaty between, the United States of America and the Yanktonai Band of Dakota or Sioux Indians. Concluded at Fort Sully, October 20, 1865.

Art. I. The Yanktonai band of Dakota or Sioux Indians, represented in council, hereby acknowledge themselves to be subject to the exclusive jurisdiction and authority of The United States, and hereby obligate and bind themselves, individually and collectively, not only to cease all hostilities against the persons and property of its citizens, but to use their influence, and, if requisite, physical force, to prevent other bands of Dakota Indians, or other adjacent tribes, from making hostile demonstrations against the Government or people of The United States.

Fort Sully was situated on the east bank of the Missouri River, twenty miles (32 km) below the mouth of Cheyenne River; latitude 44° 30' north, longitude 100° 50' west, at an elevation above the sea of about 2,000 feet (610 m). The nearest town is Yancton, 300 miles (480 km) below by river. The nearest posts are Fort Randall, 200 miles (320 km) below, and Fort Rice, about the same distance above. The post was about halfway between the head of navigation (Fort Benton) and the mouth of the Missouri, and is 1,480 miles (2,380 km) above St. Louis. It is built on the "third terrace," a level plateau, 160 feet (49 m) above low-water mark, and about the same distance below the summit level proper. On the south the surface slopes rapidly into a deep ravine, dry, except in early spring. On the west the descent is abrupt to the second terrace, a strip one hundred yards wide, on which are the stables, granary, saw-mill, smithy, interpreter's house, tavern, etc. Still further below was the river bottom, of varying width, frequently subject to overflow, moderately well timbered and very fertile. Here the company and hospital gardens are situated. 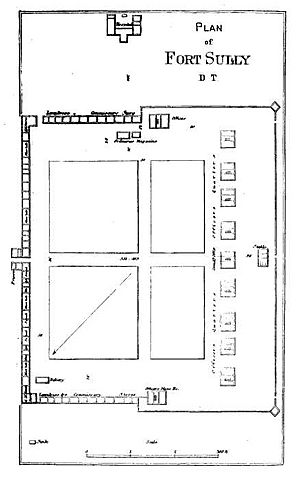 The post was intended for four companies. The men's quarters consist of two buildings, each 350 feet (110 m) long by 17 feet (5.2 m) wide, placed end to end, with an interval of 15 feet (4.6 m), which forms the sallyport. They are built of cottonwood logs, covered with pine siding, are lathed and plastered, the ceilings being 12 feet (3.7 m) high. Transverse partitions divide the buildings into dormitories, mess-rooms, kitchens, &c. The squad-rooms measure 20 by 17 feet (5.2 m), are intended for 16 men each, allowing about 255 cubic feet (7.2 m3) air space per man. The experiment was tried for one company of removing the partitions and throwing the small rooms into one, but it was thought that this weakened the building too much. There were no wash or bath-rooms. Ablution must be performed out of doors. It was in contemplation to build a piazza for each building. The dormitories were fitted with rough wooden double bunks in two tiers. The privies, ordinary earth latrines, are 75 yards distant. The ventilation of the barracks were very defective. There were three sets of laundresses' quarters, in a large one-story house similar to the officers' quarters.

The hospital was located near the brink of the ravine, to the south of the post.

In December, 1879, the headquarters, band, and Companies G and I, Eleventh Infantry, changed station from Fort Bennett to Fort Sully, D. T.

All content from Kiddle encyclopedia articles (including the article images and facts) can be freely used under Attribution-ShareAlike license, unless stated otherwise. Cite this article:
Fort Sully (South Dakota) Facts for Kids. Kiddle Encyclopedia.