Kids Encyclopedia Facts
This page is about the town in New Mexico. For the military fort charged with interning Native Americans at the Bosque Redondo reservation, see Fort Sumner. For the South Carolina fort where the U.S. Civil War began, see Fort Sumter. For other uses, see Fort Sumner (disambiguation).

Fort Sumner is a village in De Baca County, New Mexico, United States. The population was 1,031 at the 2010 census, down from 1,249 at the 2000 census. It is the county seat of De Baca County. Fort Sumner is the spring and fall home of the Columbia Scientific Balloon Facility, and is home to the alleged burial site of famed outlaw of the American West Billy the Kid.

Named after former New Mexico military governor Edwin Vose Sumner, U.S. Fort Sumner was a military fort charged with the internment of nearby Navajo and Mescalero Apache populations from 1863 to 1868. The federal government closed the fort in 1868 and sold its buildings to Lucien Maxwell, a prominent New Mexico landowner, in 1870. In the latter 1870s Maxwell's son Pete befriended legendary outlaw Billy the Kid, and it was in his house that Billy was killed by Pat Garrett. Billy the Kid is buried in the old military cemetery in Fort Sumner, as is Lucien Maxwell.

In the 1920s the Transcontinental Air Transport airline built an airfield in Fort Sumner as part of its coast-to-coast air passenger network, but the site was abandoned when the airline's ambitious plans collapsed in the Great Depression. The airfield was reopened by the United States Army Air Forces as a training base during World War II. After the war, the base became the Fort Sumner Municipal Airport, and was chosen as a launch site for NASA's high-altitude balloon program. 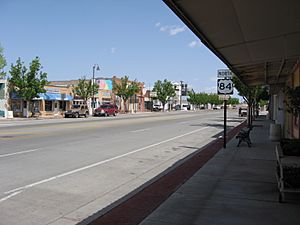 Along U.S. Route 84 in Fort Sumner

There were 533 households out of which 22.9% had children under the age of 18 living with them, 45.8% were married couples living together, 9.4% had a female householder with no husband present, and 41.3% were non-families. 38.6% of all households were made up of individuals and 23.3% had someone living alone who was 65 years of age or older. The average household size was 2.21 and the average family size was 2.97.

All content from Kiddle encyclopedia articles (including the article images and facts) can be freely used under Attribution-ShareAlike license, unless stated otherwise. Cite this article:
Fort Sumner, New Mexico Facts for Kids. Kiddle Encyclopedia.