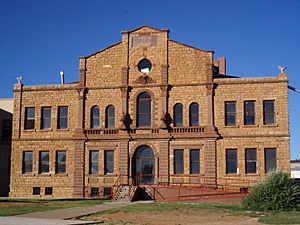 The historic Guadalupe County courthouse in Santa Rosa was built in 1909. New wing visible at left.

Santa Rosa is a city in and the county seat of Guadalupe County, New Mexico, United States. The population was 2,848 at the 2010 census. It lies between Albuquerque and Tucumcari, situated on the Pecos River at the intersection of Interstate 40, U.S. Route 54, and U.S. Route 84. The city is located west of, but not within, the Llano Estacado or "staked plains" of eastern New Mexico and west Texas.

The first Euro-American settlement in the area was Aqua Negra Chiquita, "Little Black Water" in Spanish, in 1865. The name was changed in 1890 to Santa Rosa (Spanish for "Saint Rose"), referring to a chapel that Don Celso Baca (the founder of the city) built and named after both his mother Rosa and Saint Rose of Lima. The "Rosa" may also refer to the roses in the story of Our Lady of Guadalupe and is indicative of the Catholicism of the Spanish colonizers who settled in the area.

At the time of its founding, Santa Rosa was not the largest settlement within the small radius. Puerto de Luna, or PDL, about ten miles south, held the county seat for Guadalupe County. Santa Rosa was more of a so-to-say suburb of Puerto de Luna until 1901 when the Chicago, Rock Island & Pacific Railroad was built in Santa Rosa. Because of the rocky and mountainous terrain of PDL, the railroad had to be built in Santa Rosa turning the city into a boomtown that grew exponentially.

Santa Rosa was connected by railroad to Chicago, El Paso, and the world at large in the early 1900s.

Santa Rosa's stretch of U.S. Route 66 is part of film history. When John Steinbeck's epic novel, The Grapes of Wrath, was made into a movie, director John Ford used Santa Rosa for the memorable train scene. Tom Joad (Henry Fonda) watches a freight train steam over the Pecos River railroad bridge, into the sunset. It was also one of the shooting scenes for Bobbie Jo and the Outlaw starring Lynda Carter in the titular role.

The town was the childhood home of author Rudolfo Anaya, and is the basis for the fictional town of Guadalupe in his autobiographical novel Bless Me, Ultima.

Santa Rosa has many natural lakes, an anomaly in the dry desert climate surrounding it. These are sinkholes that form in the limestone bedrock of the area and fill with water, and thus the lakes are connected by a network of underground, water-filled tunnels. The most famous of these is Blue Hole, a popular spot for diving, where cool 61 °F (16 °C) water forms a lake over 81 feet (25 m) deep. 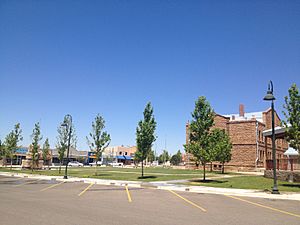 There were 898 households out of which 35.0% had children under the age of 18 living with them, 45.1% were married couples living together, 18.3% had a female householder with no husband present, and 31.3% were non-families. 28.0% of all households were made up of individuals and 11.2% had someone living alone who was 65 years of age or older. The average household size was 2.50 and the average family size was 3.03.

All content from Kiddle encyclopedia articles (including the article images and facts) can be freely used under Attribution-ShareAlike license, unless stated otherwise. Cite this article:
Santa Rosa, New Mexico Facts for Kids. Kiddle Encyclopedia.