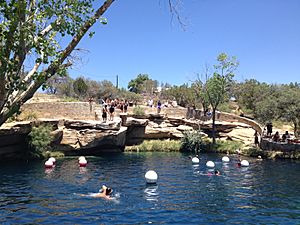 The Blue Hole is popular with divers and swimmers

The Blue Hole of Santa Rosa, or simply the Blue Hole, is a circular, bell-shaped pool or small lake located along Route 66 east of Santa Rosa, New Mexico that is a tourist attraction and swimming venue, and one of the most popular dive destinations in the US for SCUBA diving and training. The Blue Hole is an artesian well and cenóte that was once used as a fish hatchery.

The Blue Hole an example of a natural artesian well, a type of well or spring fed by water under high pressure; and of a cenóte, a collapsed cavern exposing groundwater beneath. The cavern was formed by the dissolution of the limestone bedrock by groundwater, carving caverns into the rock until the roof caved in.

At the bottom are large boulders, rubble, bones, masks, a crucifix, and other objects, and the entrance to a labyrinth of cave passages and rooms. The caves extend down to 194 feet (59 m), where they end in a cavern with a rubble-choked floor. The source water for the pool rushes up from the rubble in the floor of this cavern. Beneath this may be more passages. One local legend states that the passages may be connected to Carlsbad Caverns, one of the longest explored cave systems in the United States, however the surface entrance to that cave system is located over 200 miles to the south.

Since 1976, the cave passages have been sealed off to the public by a metal grate installed by the city to prevent access by inexperienced divers. It was only allowed to be unsealed for mapping between 2013 and 2016 by the ADM Exploration Foundation, an experienced cave exploration group. Hazards in the passages include frequent cave-ins, zero visibility due to silt, and extreme restrictions.

Since Santa Rosa, New Mexico is at an elevation of 4,616 ft (1,407 m), it is necessary for divers to use high-altitude dive tables to compute the dive profile and decompression stops when diving in the Blue Hole.

At the site is a visitors center, divers' locker rooms, a conference center, picnic tables, restrooms, a diving platform, and a short wall surrounding the pool to prevent surface runoff from fouling the clarity of the water. The pool is open for public use, including picnic, swimming, diving, and snorkeling, however, there are no lifeguards on duty.

The Blue Hole was used by nomadic tribes as a reliable water source in the arid plains that surround the area. Cowboys on cattle drives across the Pecos River would also stop by the pool. When Route 66 came through the city in the 1920s, the original alignment brought it right past the property of the Blue Hole. The pool became a popular stop and tourist attraction for motorists on the new highway. In 1932, it became a hatchery for the National Fish Hatchery. Afterward it became the Blue Hole Recreation Area in the 1970s, then the Blue Hole Dive and Conference Center. In the current era of the Interstate, the pool continues to be a popular destination with both locals and divers from around the world.

During their searches for a missing diver in late winter and early spring of 1976, rescue divers with the New Mexico State Police crudely mapped part of the then-unexplored cave system and noted the discoveries within. They reportedly reached a depth of 225 feet (69 m), but that "this number would be closer to 190’ as the divers were not using depth gauges that were adjusted for altitude". At the entrance, they encountered a tight restriction that required removing equipment to access, and the exhaust from their SCUBA equipment dislodged rocks and caused cave-ins. One room was reported at 17 feet (5.2 m) above the cave floor, but collapsed as they occupied it; one of the divers was struck and nearly trapped by a falling boulder 3 feet (0.91 m) in diameter.

When the divers accessed the second room, they noted formations such as shafts, cracks, and crevasses in the ceiling of the cavern. Another room they explored, dubbed the "Tee-Pee Room", had a ceiling that "looks as though thousands of ice cream cones were hanging invertly", as noted by Police diver Tom Hawkins. Hawkins also stated of the caves:

“When I went down to the third chamber, I was using a 100,000 candle-power flashlight[...] I could see easily in the chamber, but I couldn’t see to the other side — or the bottom — of the third chamber. Just imagine yourself in Carlsbad Cavern, but filled with water and without light.”

After the recovery operation, the city of Santa Rosa sealed the entrance with a 3 foot (0.91 m) diameter duct and grate "snorkel pipe" in April to prevent future access to the caverns. Moreover, the Army Corps of Engineers dumped two truckloads of rock and debris into the grate, apparently without the knowledge of city officials.

In 2013, the ADM Exploration Foundtion and the city fielded an exploration expedition to explore and map the cave system. With permission from the city, the expedition team removed the snorkel pipe to gain access to the first cavern. However, the lack of previous knowledge of the debris dumped into the grate by the army prevented further exploration. Although the team were able to remove tons of rock and debris from the cavern floor significantly increasing the water discharge rate, they ultimately "were thwarted by one lone boulder choking the entrance to the second room".

After the expedition, the city installed another grate to prevent access to the exposed cave entrance. Over the next three years, the team worked with state police and APD divers to dredge and remove the remaining debris and open up the passages.

In March 2016 the ADM team returned for another expedition to map and explore the entirety of the cave system. The team explored down to a depth of 194 feet (59 m), where the water was found filtering up through tons of rock debris covering the cavern floor. Another fatality occurred during this expedition, outlined in the next section of this article. After the expedition, the team announced that all accessible areas of the system have been explored and mapped, and recommended to the city that the entrance remain closed to the public.

Once again, the city installed a snorkel pipe to prevent further access. As of March 2021, no one has entered the caves since the expedition.

All content from Kiddle encyclopedia articles (including the article images and facts) can be freely used under Attribution-ShareAlike license, unless stated otherwise. Cite this article:
Blue Hole (New Mexico) Facts for Kids. Kiddle Encyclopedia.