Fort Tillinghast was a small lunette that the Union Army constructed in Alexandria County (now Arlington County), Virginia, as part of the Civil War defenses of Washington (see Washington, D.C., in the American Civil War). Fort Tillinghast stood about 0.6 miles away from Arlington House, the Union-occupied estate of Confederate General Robert E. Lee. 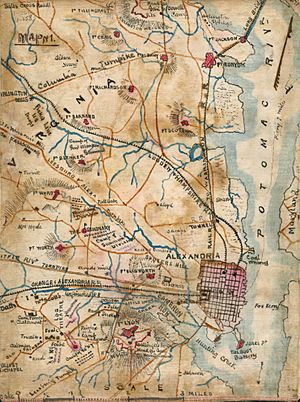 Following the Union Army's rout at the First Battle of Bull Run (Manassas) in late July 1861, the Union Army constructed Fort Tillinghouse in August of that year. The lunette was part of the Arlington Line and tied into Fort Craig approximately 0.6 miles (1.0 km) to the south and Fort Cass approximately 0.3 miles (0.5 km) to the north. Along with Forts Cass, Woodbury, Morton, and Strong, the fortification covered approaches to the Long Bridge and the Aqueduct Bridge (near the modern Key Bridge).

A May 17, 1864, report from the Union Army's Inspector of Artillery (see Union Army artillery organization) noted the following:

In June, 1865, Fort Tillinghast was ordered dismantled and the site returned to its previous owners. The fortification stood near 205 North Wayne Street in Arlington, but no sections remain today. A historic marker, near the intersection of Arlington Boulevard (U.S. 50) and North 2nd Street in Arlington, shows the location where the fort once stood. The marker depicts the fort's position on a map of the city's defenses and states:

All content from Kiddle encyclopedia articles (including the article images and facts) can be freely used under Attribution-ShareAlike license, unless stated otherwise. Cite this article:
Fort Tillinghast Facts for Kids. Kiddle Encyclopedia.