Kids Encyclopedia Facts
This page is about the historic site and state park. For the neighborhood of Fort Trumbull, see New London, Connecticut.

Fort Trumbull is a fort near the mouth of the Thames River on Long Island Sound in New London, Connecticut and named for Governor Jonathan Trumbull. The original fort was built in 1777, but the present fortification was built between 1839 and 1852. The site lies adjacent to the Coast Guard Station New London and is managed as the 16-acre Fort Trumbull State Park by the Connecticut Department of Energy and Environmental Protection.

In 1775, Governor Jonathan Trumbull recommended building a fortification at the port of New London to protect the seat of the government of Connecticut. The fort was built on a rocky point of land near the mouth of the Thames River on Long Island Sound; it was completed in 1777 and named for Governor Trumbull, who served from 1769 to 1784. It was attacked in 1781 during the American Revolutionary War, and was captured by British forces under the command of Benedict Arnold.

Benedict Arnold had changed his allegiances by this time, and he was serving as a brigadier general in the British Army when he led a raid on Groton and New London, Connecticut on September 6, 1781. Two bodies of troops were landed on either side of the mouth of the Thames River and marched towards Fort Trumbull in New London and Fort Griswold in Groton.

Fort Trumbull fell after little resistance, but about 150 Connecticut militiamen made a gallant stand at Fort Griswold in the Battle of Groton Heights. The British were finally able to enter the fort, and militia commander Lieutenant Colonel William Ledyard offered his sword to Major Bromfield, the British commander on the scene, as a token of surrender. According to contemporaneous accounts, Bromfield took the sword from Ledyard and drove it through him, and the British then proceeded to massacre the surviving defenders. Eighty-five of the militiamen were killed and the others were either severely wounded, taken prisoner, or managed to escape.

After the capture of both forts, the British proceeded to burn New London and then returned to their ships.

An account of the battle published in a Philadelphia newspaper follows:

- Extract of a letter from New London, dated Sept. 12.

Arnold had long promised to visit New London and the neighbouring towns on the sea shore, and the enemy having frequently appeared in sight of the harbour, the alarm guns fired on the present occasion were considered by the country around us the salutes of prizes or other vessels belonging to the port. He however arrived the 6th inst. about five o, and at seven o’ landed about 2500 men, half on each side of the river. At 8 o’ the militia mustered in parties of 8 or 10, and annoyed the enemy until about 100 of them came up and disputed their way to Fort Trumbull; their great superiority obliged our people to yield to them the possession of the fort. Col. Ledyard, with about 76 other brave fellows, retreated to the fort on Groton side, which they determined resolutely to defend. The next assault was upon this fort, where they were repulsed several times by a bravery unequalled, for about three hours. A flag was then sent, demanding a surrender of the fort, accompanies by a threat of giving no quarters in case of refusal. The commandant consulted with his brave garrison, who refused to submit. The action was then renewed, when the flag staff was unfortunately shot away; notwithstanding which the defence was gallantly continued until about five or six hundred of the enemy having forced the pickets had entered through the breach. At this time there were but four of the garrison killed, and it was thought prudent to submit, to preserve the lives of the remainder. The officer who at this time commanded the assailants, (Major Montgomery being killed) enquired who commanded the garrison? Colonel Ledyard informed him that he had had that honour, but was unfortunate in being obliged to surrender it, at the same time delivered up to him his sword, and asked for quarter for himself and people; to which the infamous villain replied, "ye rascals, I give you quarters," and then plunged the sword into his body. The inhuman banditti, taking this as a signal, drove their bayonets up to the muzzles of their pieces into the breasts of all that were taken, except one or two who made their escape.

After massacring the living they insulted the dead, by actions too horrid to mention --- the bodies were arranged alongside of each other for the purpose, and, to shew contempt to Col. Ledyard, they singled out a Negroe to place next to him.

Never was there more distress in any place than there is here at present; there are 50 widows within 8 miles of Groton fort.

Before their departure, which was in the evening of the same day they landed, they burnt all the shipping that could not get up Norwich river, among which were several rich prizes lately arrived, with their cargoes, some of which were stored and the rest on board the vessels – about 40 sail, all on fire, were floating up and down the stream. The prize brig Hope, laden with provisions, happily escaped the general conflagration, altho'the fire from the shore several times caught the awning which covered her quarter deck, and went out --- several vessels in full blaze passed within two and three feet of her; ten lay within forty yards, and consumed to the wateredge, but Providence directed she should escape, and a very fortunate one it was, as there was no other supply of provisions in town. – The Pennsylvania Gazette, September 26, 1781 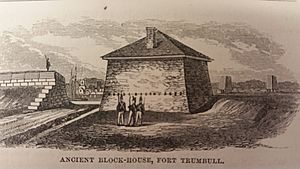 The fort was repaired circa 1808, and redesigned and rebuilt in 1812 to meet changing military needs under the second system of US fortifications. First a redoubt was built at the site to react to threat of British attack. Secretary of War Henry Dearborn's report on fortifications for December 1811 describes the fort as "an irregular enclosed work of masonry and sod, mounting 18 heavy guns [with] a brick barracks for one company". The present fortification replaced the older fort, and was built between 1839 and 1852 as a five-sided, four-bastion coastal defense fort. It could accommodate 42 guns on the seacoast fronts, plus 10 additional guns in two flanking batteries outside the fort, along with flank howitzers in bastions for close-in defense. The new fort was built under the supervision of Army engineer George Washington Cullum, who later served as superintendent of the United States Military Academy at West Point, New York.

During the Civil War, Fort Trumbull served as an organizational center for Union troops and headquarters for the 14th US Infantry Regiment. Here, troops were recruited and trained before being sent to war. Fort Trumbull was briefly commanded by John F. Reynolds, who rose to the rank of major general and was killed at the Battle of Gettysburg in 1863.

From 1863 to 1879, Ordnance Sergeant Mark Wentworth Smith was assigned to Fort Trumbull and served as the caretaker of Fort Griswold, which was an un-garrisoned subpost of Fort Trumbull across the Thames River in the town of Groton. Among other duties, he maintained a vegetable garden to help feed the soldiers at Fort Trumbull. Smith was born in New Hampshire in 1803 and enlisted in the Army on January 27, 1827 at the age of 23. He was wounded in action at the Battle of Chapultepec during the Mexican War. For unknown reasons, he was allowed to serve on active duty in the Army until his death in 1879 at the age of 76. He was possibly the oldest enlisted man to serve on active duty in the United States Army in the 19th Century. (Army Air Forces Master Sergeant John W. Westervelt served on active duty during World War II until he was retired at age 77 in 1945. Chief Torpedoman's Mate Harry S. Morris was born in 1888 and served in the Navy from 1903 to 1958 when he was "only" 70 years old.) Sergeant Smith is buried in the Colonel Ledyard Cemetery in Groton. 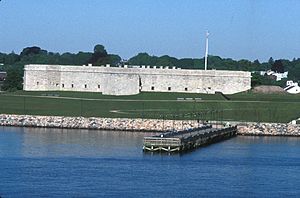 After the Civil War, Fort Trumbull was improved by having more modern artillery pieces installed. In the early 1900s, several more modern Endicott era fortifications were built to defend Long Island Sound as the Harbor Defenses of Long Island Sound, including Fort Mansfield in Watch Hill, Rhode Island, Fort H.G. Wright on Fishers Island, and Fort Michie on Great Gull Island. Fort Trumbull served as the headquarters of these forts until it was turned over to the Revenue Cutter Service (later renamed the Coast Guard) in 1910 for use as the Revenue Cutter Academy, which was renamed the United States Coast Guard Academy in 1915. The Academy moved to its current location about two miles up the Thames River in 1932. 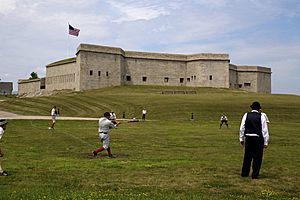 After a redevelopment period lasting several years, Fort Trumbull was opened as a state park in the year 2000. It is used as a site for concerts and other special events. The main fort is open to the public and has an elevator to access the upper portions of the fort. There is a museum about the fort in the former officers' quarters.

All content from Kiddle encyclopedia articles (including the article images and facts) can be freely used under Attribution-ShareAlike license, unless stated otherwise. Cite this article:
Fort Trumbull Facts for Kids. Kiddle Encyclopedia.