The Four Shire Stone is a boundary marker that marks the place where the four historic English counties of Warwickshire, Oxfordshire, Gloucestershire, and Worcestershire once met. Since 1931, with a change to the boundaries of Worcestershire, only the former three counties have met at the stone. 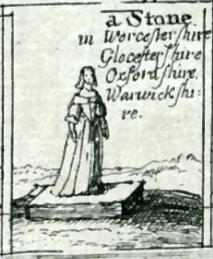 Detail from Wenceslaus Hollar, An Orthographical Designe of Several Views Upon Ye Road, in England and Wales, 1660. 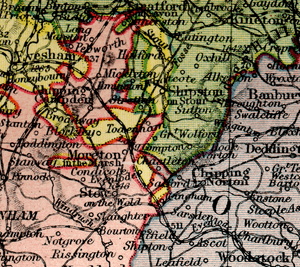 Detail of map from Philips' New handy general Atlas, 1921, showing four counties meeting at the Four Shire Stone. Worcestershire is shown in yellow, Warwickshire in green, Oxfordshire in violet and Gloucestershire in pink.

Most of Worcestershire is to the north-west of the stone. Thus the order of the four counties around the stone was different from what one might expect from a map of England. The stone ceased to be the meeting-point of four shires in 1931, when Evenlode was transferred to Gloucestershire, so since that date only three counties meet at the stone.

All content from Kiddle encyclopedia articles (including the article images and facts) can be freely used under Attribution-ShareAlike license, unless stated otherwise. Cite this article:
Four Shire Stone Facts for Kids. Kiddle Encyclopedia.