Moreton-in-Marsh is a town civil parish in northeastern Gloucestershire, England. The town is located at the crossroads of the Fosse Way Roman road (now the A429) and the A44 and served by Moreton-in-Marsh station on the Cotswold Line. The parish and environs are relatively flat and low-lying compared with the surrounding Cotswold Hills. The River Evenlode rises near Batsford, runs around the edge of Moreton and meanders towards Oxford, where it flows into the Thames just east of Eynsham. Just over 1.5 miles (2.4 km) east of Moreton, the Four shire stone marked the boundary of the historic counties of Gloucestershire, Warwickshire, Worcestershire and Oxfordshire, until the re-organisation of the county boundaries in 1931. Since then it marks the meeting place of Gloucestershire, Warwickshire and Oxfordshire. 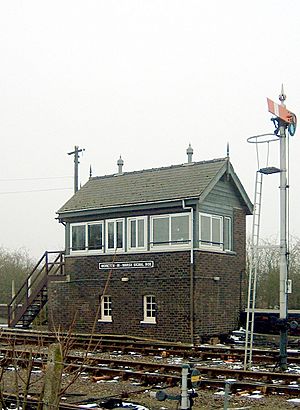 The toponym is derived from Old English. Moreton means "Farmstead on the Moor" and "in Marsh" is from henne and mersh meaning a marsh used by birds such as moorhens. An alternative suggestion is that 'Marsh' is a corruption of 'March', early English for boundary.

The Curfew Tower on the corner of Oxford Street is probably 16th century. Its bell was cast in 1633 and its clock was built in 1648.

The Church of England parish church of Saint David began as a chapel of ease for Blockley, to which the residents of Moreton had to transport their dead for burial. The early history of the church in Moreton is not clear, but there is evidence that a primitive Celtic place of worship preceded the church on the present site, which had seven springs. The church at Moreton came under the jurisdiction of the Batsford Estate, when that estate was given to the Bishops of Worcester in the 12th century. Latterly, the church in Moreton was a chapel-at-ease for Batsford, which was technically the parish church. The appointment of the vicar for Batsford with Moreton alternates between the Bishop of Gloucester and the Lord of the Manor at Batsford, currently Lord Dulverton, who, until the Second World War, exercised his right to collect a shilling (5 pence) a year for every shop window facing Moreton High Street. There is a tradition that the church was rebuilt and reconsecrated in the middle of the 16th century. The nave was enlarged in 1790, most of the church was rebuilt in 1858 and the tower was replaced in 1860. The chancel and south aisle were enlarged in 1892 and the east end of the south aisle has been used as a chapel since 1927.

A nonconformist congregation started meeting in Moreton in 1796, was constituted as a Congregational church in 1801 and had a chapel built in 1817. In 1860–61 the Congregationalists replaced the chapel with a new one on the same site in a mixed neo-Grecian and Romanesque style.

The Stratford and Moreton Tramway was built between 1821 and 1826, linking Moreton with the Stratford-on-Avon Canal at Stratford. It was horse-drawn until 1859, when the section between Moreton and Shipston-on-Stour was converted to a branch line railway operated with steam locomotives. The Oxford, Worcester and Wolverhampton Railway, built between 1845 and 1851, passes through Moreton. The railway station was opened in 1853. The Great Western Railway (GWR) took over the OW&W Railway in 1862 and the Shipston-on-Stour branch in 1868. The GWR withdrew passenger trains from the branch in 1929 and British Railways withdrew freight traffic and closed it in 1960. The OW&W Railway is now part of the Cotswold line. The line between Oxford (Wolverton Junction) and Worcester (Norton Junction) was singled, except for the distance between Shipton-under-Wychwood to Moreton-in-Marsh, in the 1970s. The double track has been replaced, except between Evesham and Worcester (Norton Junction) in 2011, and freight services are planned to re-use this route. 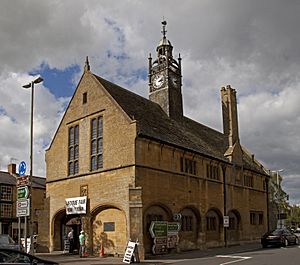 The Redesdale Market Hall was designed by the architect Sir Ernest George and built in 1887.

The town was known as "Moreton-in-the-Marsh" into the early 20th century. The name was changed to "Moreton-in-Marsh" before 1930.

In 1940, a large area of level land east of the town was developed as RAF Moreton-in-Marsh and used by Wellington bombers. The former airfield is now the Fire Service College where senior fire officers from brigades all over the UK undergo operational, management and leadership training. The same complex is also now the headquarters of the Institution of Fire Engineers, the professional body for fire fighters, officers and civilians with an interest in fire engineering.

Moreton-in-Marsh and Batsford War Memorial is in the High Street and commemorates the dead of the First and Second World Wars.

The last time Moreton was badly flooded was in 2007. The floods, which blocked the High Street, were fairly regular in the 1950s and 1960s, until works were carried out on the ditches around the town. These works resolved most of the problems.

There was a Roman fort near Dorn (1 mile NW of Moreton) and the site of the annual Moreton and District Agricultural Show, held on the first Saturday in September, is actually on part of the site of the fort. The railway line to Worcester runs alongside the show ground, and at Dorn reaches the highest point between Oxford and Worcester. This is also the Thames/Severn watershed.

Moreton was once the headquarters of the railway spot-hire company Cotswold Rail.

Moreton has many buildings in characteristic Cotswold stone, numbers of antique shops and several hotels. A Caravan Club site is a short walk east on the Broadway road (A44), past the Wellington Aviation Museum, a museum of the history of the Vickers Wellington bomber. Other local attractions include Batsford Arboretum near Batsford village and the onion-domed Sezincote house and gardens.

All content from Kiddle encyclopedia articles (including the article images and facts) can be freely used under Attribution-ShareAlike license, unless stated otherwise. Cite this article:
Moreton-in-Marsh Facts for Kids. Kiddle Encyclopedia.