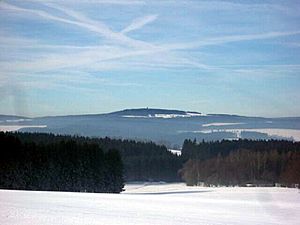 The Doerbraberg is the highest elevation in the region. Its peak is at 794 metres above sea leavel.

The Frankenwald (roughly translates to Franconian forest) is a mountain range. It is in the district of Oberfranken in Bavaria. It connects the Fichtelgebirge to the Thuringian forest. It is a long forested plateau. The hills in the plateau form a watershed between the Rhine and the Elbe rivers.

It was settled in the 13th century. The main branches of industry were porcelain-making, forestry, and the production of charcoal. Rafts were built to get the wood into the larger cities, along the Main river, and the Rhine. First, the people setlted on the plateau. They cut down some forest, and settled in the clearing that was created that way. A well preserved example of such a setltlement is Wilhelmsthal. Only at a later date did people settle in the valleys.

In the Frankenwald, the following landscapes are prevalent:

All content from Kiddle encyclopedia articles (including the article images and facts) can be freely used under Attribution-ShareAlike license, unless stated otherwise. Cite this article:
Frankenwald Facts for Kids. Kiddle Encyclopedia.