Kids Encyclopedia Facts
Not to be confused with Franklin County, Georgia.

Franklin is a village in Heard County, Georgia, United States. The population was 993 at the 2010 census, up from 902 at the 2000 census. Franklin is the county seat of Heard County. The city is named after Benjamin Franklin.

Franklin was settled in 1770. Franklin was designated seat of the newly formed Heard County in 1831. 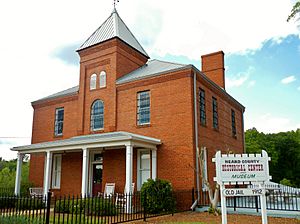 Pauly Jail Company of Alabama built the jail in 1912 for $7,500, using plans by Manly Jail Works of Dalton, Georgia. It replaced an older jail built in 1880 that had become unfit. The jail housed up to 16 prisoners upstairs. The Heard County Sheriff (there were eight sheriffs from 1912–1964) and his family lived downstairs. In the 1930s, two prisoners cut the window bars and escaped. Death row prisoners were held here, but the jail's gallows were never used. In 1964, a new county jail opened on the Franklin Square and the old jail closed.

The jail was listed on the National Register of Historic Places on January 27, 1981. In 1987 it was completely restored by the Heard County Historical Society. It now serves as a museum and historical center.

The Heard County School District holds pre-school to grade twelve, and consists of three elementary schools, a middle school, and a high school. The district has 132 full-time teachers and over 2,278 students.

All content from Kiddle encyclopedia articles (including the article images and facts) can be freely used under Attribution-ShareAlike license, unless stated otherwise. Cite this article:
Franklin, Georgia Facts for Kids. Kiddle Encyclopedia.