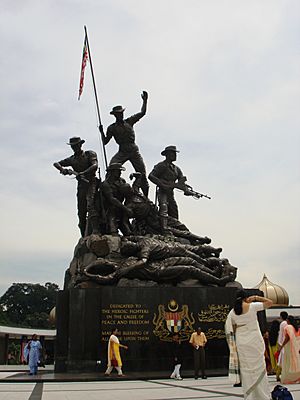 A freedom fighter is a person who thinks his native ethnic group is not free, and is working to have freedom for his group. Most often this means in that a freedom fighter wants his people to have own nation and independency and/or to get rid of oppressors. People who think like this are said to think in a nationalist way.

These are examples of groups who call themselves freedom fighters.

Other Examples of Freedom Fighters

All content from Kiddle encyclopedia articles (including the article images and facts) can be freely used under Attribution-ShareAlike license, unless stated otherwise. Cite this article:
Freedom fighter Facts for Kids. Kiddle Encyclopedia.