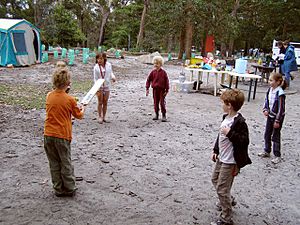 French cricket is a form of cricket that creates a game similar to catch. The game can be played socially at picnics and parties or on parks and beaches. It is an ideal form of cricket that can include children of varied ages. Not all participants need to be fully involved, and spectators can make a catch and have a bat (informally).

There is only one batsman, and their objective is to not be dismissed by the other participants — who are fielders, or a bowler if they have possession of the ball — for as long as possible. The objective of the other participants is to dismiss the batsman. There are only two methods of dismissal, being caught or being "Leg Before Wicket", but as there are no stumps, this method of dismissal is effected by a bowled ball hitting the batsman's legs typically below the knees. Once the batsman is dismissed, the other participant who took the catch or effected the LBW typically replaces them as batsman, and the game-play begins again. There are many varieties of additional rules. The batsman may be obliged to stay with their legs in the same place , facing the same way for the whole of their innings; they may remain in the same place but be permitted to change their stance if they effect a shot by hitting the ball; or, they may be able to freely move around after playing a shot. The batsman may also score runs in some variations of the game.

French cricket is most commonly played by children, or mixed groups of children and adults. Adults sometimes play the game as an event diversion during outdoor parties or on picnics. If the game is played more seriously, players take turns to bat and the player who batted for the most balls or the longest time is considered the winner.

The type of equipment is not restricted to cricket equipment, but there are only two items used. The ball is typically a tennis ball, bowled underarm at the legs of another player holding a cricket bat, a tennis racquet, or some other object that can be used as like a cricket bat.

The player holding the bat, the batsman, is required to block and defend his "wicket", with the batsman's legs taking the place of the stumps. The batsman is not allowed to move their legs, and in some variants, the batsman can only hit the ball in a direct upward or scooping-like motion.

Any number of fielders can stand around the batsman, and any fielder can bowl at the batsman from any angle.

Suggested possibilities include juxtaposition with the English origin of regular cricket. It seems likely that as the game is a lesser version of regular cricket that the name is intended to mock both the game and the French — just as a "French cut" in the sport of cricket is a poorly executed cut shot which almost gets a batsman out. The name may also have arisen from the similarity of the batting motion to the one used in croquet which while not a French game is sometimes assumed to be French because of its name.

All content from Kiddle encyclopedia articles (including the article images and facts) can be freely used under Attribution-ShareAlike license, unless stated otherwise. Cite this article:
French cricket Facts for Kids. Kiddle Encyclopedia.