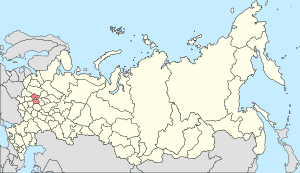 Location of Moscow Oblast in Russia

Fryazino is a scientific town in Moscow Oblast, Russia. It is about 25 miles northeast of the city of Moscow. The population is about 55,369.

Fryazino is an electronics center. Merloni Electrodomestici of Italy has facilities in Fryazino that make electric stoves and washing machines. Currently, however, a large part of the population of Fryazino works in Moscow.

The first school was opened in Fryazino in 1912. There are seven schools, including five secondary and gymnasiums in the town now. By the end of 1980, 20% of the population of Fryazino had a higher education.

All content from Kiddle encyclopedia articles (including the article images and facts) can be freely used under Attribution-ShareAlike license, unless stated otherwise. Cite this article:
Fryazino Facts for Kids. Kiddle Encyclopedia.