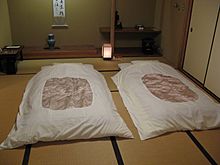 Futons are traditional Japanese bedding. A futon is a padded mattress, called a shikifuton, a quilt, called a kakefuton, and a pillow filled with beans, called a makura. The futon was put on the floor at night for sleeping. They could be easily rolled up during the day when they were not needed. The word futon has come to mean a lot more than this. Although many Japanese people sleep in a bed, they say "I sleep on futon"; it means to go to bed. Futon now means things that Japanese people sleep on, including beds. 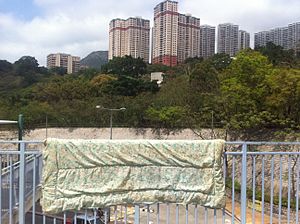 Futons are generally used with a futon cover, because these make it easy to keep the futon clean. People generally use futons so they can sleep comfortably, stay warm and support their bodies while asleep. People usually sweat during sleep, so futons absorb sweat and collect moisture. Futons have to be hung out in sunlight to keep them dry, this is called futon-hoshi. If this is not done, ticks and mold could grow on the futon and it will become dirty and insanitary. Futons need to be looked after properly.

In the 13th century, most people slept on straw mats, but the nobles slept on tatami. These were not as soft as futons are now. It was said that they were hard and uncomfortable. For a very long time, people covered themselves with their clothes to keep warm. Most people slept nude. Rich people never did such things.

In the 17th century, bedclothes were made. People made it by stuffing cloth with cotton and wool. These bedclothes are the original form of the futon.

In the 18th century, futon production started because there was more domestic cotton available.

In those days, futon meant a mattress, not a quilt. Bedclothes were common. In the Kansai area, they used a square thing like a blanket, a fusuma. The quilt is said to have evolved long before it.

In the 19th century, most people were able to buy futons. The import of the raw cotton began, and many factories were built. Because of industrial development, making futons was easier and more efficient than before. This made the price become down and people were able to afford them. 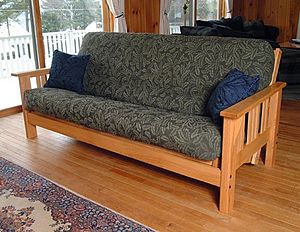 The manufacturer "Nishikawa" is the most famous. This company is in Kyoto and Tokyo. They make everything for the futons, for example, pillows, sheets, and quilts. This brand has history of 440 years.

In old days, people thought any futon was good as long as they could sleep. But now people want better futons. Today, people like a futon which they can relax on and recover from fatigue. Futon makers have developed futons that can adjust to the human body. This is called Seiatsu Futon in Japan. There is some advantages to this new type of futon. Since ventilation is good, they are cool in summer and warm in winter. Since it can adjust to ideal posture when you sleep, it improves blood circulation while sleeping. And they are easy to look after. Also a futon of "low repulsion" is popular among Japanese people. This is said to fit the body of the user. Some users who are troubled by bedbugs on futon like "tick guard" futons.

All content from Kiddle encyclopedia articles (including the article images and facts) can be freely used under Attribution-ShareAlike license, unless stated otherwise. Cite this article:
Futon Facts for Kids. Kiddle Encyclopedia.