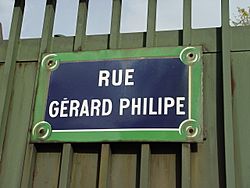 Gérard Philipe was born in Cannes, France. He had Czech ancestry from his maternal grandmother. When Philipe was a teenager, he took acting lessons. He done this before going to Paris to study at the Conservatoire of Dramatic Art. When Philipe was 19, he made his stage debut at a theater in Nice. The following year, he performed in the Albert Camus play, Caligula.

Philipe made his movie debut in Les Petites du Quai aux Fleurs (1943). After a few other minor roles, he became famous in his performance in Claude Autant-Lara's Devil in the Flesh (1947). Philipe was popular among women because of his looks. He was also liked by his friends.

In 1951, Philipe married Nicole Fourcade (1917-1990). She was an actress and writer. They had two children. Fourcade was given the name Anne Philipe. She had also wrote about Philipe in two books. The first called Souvenirs (1960) and a second biography titled Le Temps d'un soupir (No Longer Than a Sign, 1963).

Philipe was recognized worldwide for his talent. At the time of his death, he was at his peak in his career. Philipe died of liver cancer while working on a movie project in Paris. It was several days before his 37th birthday. He was buried in the village cemetery in Ramatuelle, Var near the Mediterranean Sea.

In 1995, the celebrate 100 years of the cinema, the French government issued a series of limited edition coins. One of which included a 100 franc coin with Philipe's picture. In France, Philipe is known as an important person in that country. In 1986, he was given a postage stamp with his picture on it. There is also a movie festival named after him. There are also a number of school's in France that were named after Philipe. In Germany, he is less respected as an actor. However, a cultural center is named after him in Berlin.

All content from Kiddle encyclopedia articles (including the article images and facts) can be freely used under Attribution-ShareAlike license, unless stated otherwise. Cite this article:
Gérard Philipe Facts for Kids. Kiddle Encyclopedia.