The Gallery of Modern Art (GOMA) is an art museum located in the South Bank precinct of Brisbane, Queensland, Australia. The gallery is part of the Queensland Cultural Centre.

The gallery's first purchase was made in 1895. 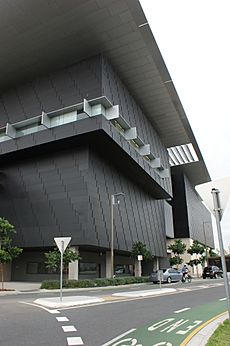 The architecture of GOMA was designed to replicate a "pavilion in the landscape".

In July 2002, Sydney-based company Architectus was commissioned by the Queensland Beattie Government following an Architect Selection Competition, to design the Queensland Art Gallery's second site, the Gallery of Modern Art (GOMA). A main theme of Architectus's design was a pavilion in the landscape, one which assumes its position as both hub and anchor for this important civic precinct. Critical to this is the building's response to the site, its natural topography, existing patterns of urban generation, and the river. Architectus was awarded the 2007 RAIA National Award for Public Architecture for the design of GOMA. 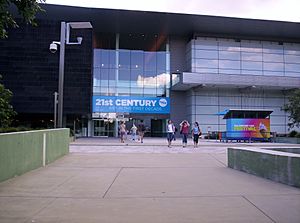 Entrance to GOMA during the exhibition "21st Century: Art in the First Decade"

Past and current exhibitions at GOMA include:

The Gallery of Modern Art (GOMA) hosts the Asia-Pacific Triennial of Contemporary Art jointly with the Queensland Art Gallery (QAG), since opening in 2006.

All content from Kiddle encyclopedia articles (including the article images and facts) can be freely used under Attribution-ShareAlike license, unless stated otherwise. Cite this article:
Gallery of Modern Art, Brisbane Facts for Kids. Kiddle Encyclopedia.