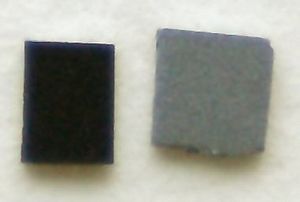 Gallium arsenide is a chemical compound. Its chemical formula is GaAs. It has gallium and arsenide ions in it. The gallium is in the +3 oxidation state.

Gallium arsenide is a gray solid. It makes crystals in a cube shape. It reacts slowly with water and quickly with acids to make arsine. It oxidizes in air.

It is made by reacting arsenic trichloride or arsenic with gallium.

All content from Kiddle encyclopedia articles (including the article images and facts) can be freely used under Attribution-ShareAlike license, unless stated otherwise. Cite this article:
Gallium arsenide Facts for Kids. Kiddle Encyclopedia.