Gamaliel is a home rule-class city in Monroe County, Kentucky, in the United States. The population was 376 at the 2010 census, this was a decline from 439 in 2000.

Around 1836, James Crawford and John Hayes saw that a town was springing up and donated ten acres of land, at a point where their farms met, to be used for educational and religious purposes. On this property, a building was erected and used for school and church and, in 1844, a cemetery was added. In making the grant, the two men stipulated that seven trustees should be appointed to administer the property along the lines provided by the donors. The original trustees were William Crawford, Maston Comer, John Hayes, Robert Welch, James Crawford Jr., Charles Browning Jr., and John Meador. This act of incorporation was passed by the General Assembly of the Commonwealth of Kentucky on December 19, 1840.

Samuel DeWitt, a local preacher and teacher, said "Gamaliel" was a good biblical name (In the Book of Acts, the Pharisee appears speaking in favor of recently arrested Christians) and this was a good village and the town took the name that he suggested. A post office was established in the community in 1870.

There were 196 households out of which 26.5% had children under the age of 18 living with them, 53.1% were married couples living together, 9.2% had a female householder with no husband present, and 33.7% were non-families. 32.1% of all households were made up of individuals and 20.4% had someone living alone who was 65 years of age or older. The average household size was 2.24 and the average family size was 2.79. 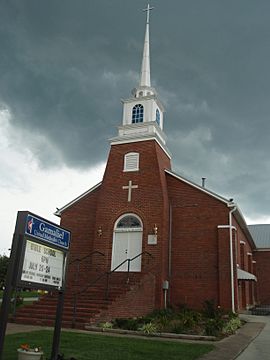 The climate in this area is characterized by hot, humid summers and generally mild to cool winters. According to the Köppen Climate Classification system, Gamaliel has a humid subtropical climate, abbreviated "Cfa" on climate maps.

All content from Kiddle encyclopedia articles (including the article images and facts) can be freely used under Attribution-ShareAlike license, unless stated otherwise. Cite this article:
Gamaliel, Kentucky Facts for Kids. Kiddle Encyclopedia.