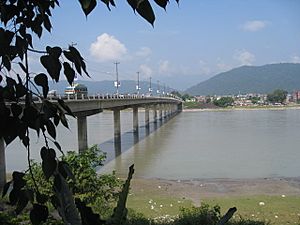 The Gandaki River is one of the major rivers of Nepal. It is the deepest river of Nepal. It is a tributary of Ganges in India. Ammonite fossils found at the bank of this river are called 'Shaligrams'. They are black, hard stones which represents Vishnu, a Hindu god.

All content from Kiddle encyclopedia articles (including the article images and facts) can be freely used under Attribution-ShareAlike license, unless stated otherwise. Cite this article:
Gandaki River Facts for Kids. Kiddle Encyclopedia.