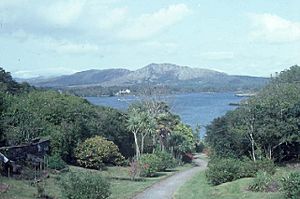 The view from Garinish Island. Knockanamadane is the mountain in the distance. Photograph dated August 1986 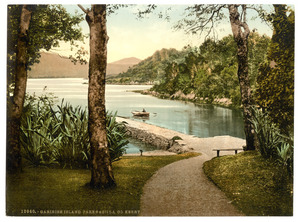 Garinish (Garinis in Irish, meaning 'The near island') is a privately owned island lying off the coast of the Iveragh Peninsula, County Kerry, Ireland.

In 1855 Edwin Edwin Wyndham-Quin, 3rd Earl of Dunraven and Mount-Earl (1812-1871), purchased "Garinish Island" near Sneem (County Kerry, Republic of Ireland) as a holiday retreat from the Bland family of Derryquin Castle. He commissioned the architect James Franklin Fuller (1835-1924) and the building contractor Denis William Murphy (1799-1863, father of William Martin Murphy) with the creation of a house, later called "Garinish Lodge", and a garden on the island.

About 1950 Mr. Reginald Browne and his wife bought the island and restored the house and the garden after many years of neglect. Their sons continued with the replenishing of plants and trees.

Since the 1990s the island is owned by Jacqui (Jacob) Eli Safra (*1948). He is a Swiss investor and a descendant of the Lebanese-Swiss Jewish Safra banking family.

Garnish Island has a fine garden, renowned for tree ferns. Cordyline australis (cabbage palms) thrive in this region. They line the pathway in the photograph on the top left.

All content from Kiddle encyclopedia articles (including the article images and facts) can be freely used under Attribution-ShareAlike license, unless stated otherwise. Cite this article:
Garinish Island (County Kerry) Facts for Kids. Kiddle Encyclopedia.