Gay Street is a street in Knoxville, Tennessee, United States, that traverses the heart of the city's downtown area. Since its development in the 1790s, Gay Street has served as the city's principal financial and commercial thoroughfare, and has played a primary role in the city's historical and cultural development. The street contains Knoxville's largest office buildings and oldest commercial structures. Several buildings on Gay Street have been listed on the National Register of Historic Places.

Gay Street and events that took place on Gay Street have been mentioned in the works of James Agee, Cormac McCarthy, Mark Twain, and George Washington Harris. Cultural institutions established along Gay Street include the Lawson McGhee Library (1886), the Bijou Theatre (1909), the Riviera Theatre (1920), the Tennessee Theatre (1928), and the East Tennessee History Center (2004). The Knoxville Journal, Knoxville Whig, and Knoxville Register were all once headquartered on Gay Street, and radio stations WNOX and WROL both broadcast from Gay Street at various times during the 20th century.

Gay Street runs for about a mile-and-a-half from its northern terminus at Emory Place to its southern terminus at its intersection with Sevier Avenue and Blount Avenue on the south side of the Tennessee River. The road is divided into North Gay and South Gay by the tracks of the Southern Railway, with South Gay being the older and more densely developed half. 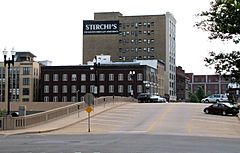 Looking south across the Gay Street Viaduct, with the 100-block of South Gay rising on the other side 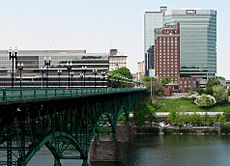 Gay Street was part of the original plat of Knoxville drawn up by surveyor Charles McClung in 1791. The street originally stretched from the river to what is now Church Avenue (Knoxville's original northern boundary). Within a few years, the boundary had been extended to Clinch Avenue, effectively adding what is now Gay Street's 600 block. The eastern half of this block was originally part of the land set aside by Knoxville founder James White for Blount College, the forerunner of the University of Tennessee. In its early years, Gay Street was known as "Market Street," "Broad Street," or "Court Street." The name "Gay Street," which was probably inspired by the Gay Street in Baltimore, had been applied by 1808.

The intersection of Gay and Main was the focal point of late 18th century Knoxville, with the courthouse initially located at its northwest corner and the jail located at its southeast corner. Knoxville's first store, established in 1792 by brothers Samuel and Nathaniel Cowan, was located on the northeast corner of this intersection, and the city's first major hotel the Lamar House (now part of the Bijou) was built on the southwest corner of Gay and Cumberland in 1817. On January 11, 1796, the first Tennessee state constitutional convention convened at the office of War Department agent Colonel David Henley, which was located at the corner of Gay and Church.

In the months leading up to the Civil War, prominent pro-Union and pro-Secession supporters spoke at Gay Street venues such as the Lamar House Hotel, while the Knoxville Whig and Knoxville Register, which were arguably the mouthpieces for East Tennessee Unionism and secessionism, respectively, were both headquartered on Gay Street. In April 1861, Union and Confederate supporters held simultaneous recruiting rallies at opposite ends of Gay Street. Future president Andrew Johnson spoke at the Union rally, and a shootout nearly erupted when several Confederate recruits attempted to interrupt his speech.

Union forces under Ambrose Burnside occupied Knoxville in September 1863, and Burnside chose as his headquarters the home of John Hervey Crozier at the corner of Gay and Clinch streets (now the location of the Farragut Hotel). Union general William P. Sanders, who was wounded in a skirmish with Confederate troops on Kingston Pike in November 1863, died at the Lamar House Hotel, which had been converted into a hospital. 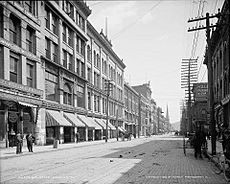 After the Civil War, several major banks were established during Knoxville's post-Civil War commercial boom, including Mechanics' National Bank (1882) and Holston National Bank (1890), both of which would eventually build headquarters that still stand on Gay Street. After the Great Depression, Hamilton National Bank (operating out of the Holston building) grew to become the dominant bank in East Tennessee. In the 1970s, this bank was seized by United American Bank president Jake Butcher, who built the Plaza and Riverview towers before being indicted for bank fraud in the 1980s.

In the early 1830s, James Cowan (a nephew of Samuel and Nathaniel Cowan) and his brother-in-law, Perez Dickinson, opened a large general store at the corner of Gay and Main. During the 1850s, Cowan and Dickinson merged their interests with the McClung brothers (children of surveyor Charles McClung) to form the wholesaling giant, Cowan, McClung and Company. In the years following the Civil War, this company was the most profitable in Tennessee, and anchored Knoxville's powerful wholesaling sector. The company's four-story headquarters, erected on Gay Street's 500 block in 1871, was the cornerstone of what is now known as the Gay Street Commercial Historic District.

Sterchi Brothers, founded in 1888, grew to become the world's largest furniture store chain by 1930, and built its 10-story headquarters at 114 South Gay in 1925. W. W. Woodruff and Company, founded in 1865, maintained a presence on Gay Street into the late 20th century. Gay Street was home to many of Knoxville's major department stores throughout the first half of the 20th century, most notably Miller's and S. H. George's. 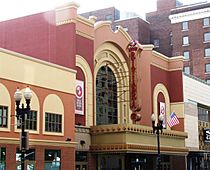 The Riviera Theatre, constructed in 1920 and renovated in 2007

Throughout most of the 19th century, the Lamar House Hotel on Gay Street was the premier gathering place for Knoxville's upper class. During the 1870s and 1880s, the hotel's masquerade balls served oysters, imported wines, and cigars, and drew the likes of artist Lloyd Branson (whose studio was also located on Gay Street) and author Frances Hodgson Burnett. By the 1930s, the Farragut Hotel (1919) and the Andrew Johnson Hotel (1929) had become Knoxville's premier hotels. Country music singer Hank Williams spent the last night of his life at the latter on New Year's Eve, 1952.

Knoxville's first major performance venue, Staub's Theatre, was built on Gay Street's 800 block in 1872, and in its early years showcased acts ranging from Payson's English Opera Troupe to vaudeville acts and wrestling matches. The Bijou Theatre, constructed as an addition to the Lamar House Hotel in 1909, would witness performances by the likes of the Marx Brothers, Dizzy Gillespie, and the Ballets Russes. In 1928, the Tennessee Theatre eclipsed the Bijou as Knoxville's major performance venue, and served as the city's first-run movie house until the 1950s.

Knoxville's two oldest radio stations, WNOX and WROL, broadcast from Gay Street during the 1920s and 1930s. WNOX featured Lowell Blanchard's Mid-Day Merry-Go-Round, initially broadcast from the Andrew Johnson Hotel, which helped launch the careers of performers such as Roy Acuff and Archie Campbell, and remained a popular noon-time radio show until the 1950s. WROL, which broadcast from the Central House Hotel (next to the Farragut), the Mechanics' Bank building, and later from a North Gay location, was best known in this period for its host, eccentric local businessman Cas Walker.

The Saulpaw bridge, the predecessor of the current Gay Street Bridge, as it appeared on an 1886 map of Knoxville

Knoxville's first permanent bridge over the Tennessee River was constructed at the south end of Gay Street in 1867, but stood for just a short time. In 1880, G. W. Saulpaw built what became known as the "Saulpaw bridge" at the site, which stood until it was replaced by the current Gay Street Bridge in 1898. At the street's north end, an iron bridge was built across the Southern Railway tracks in 1876, easing pedestrian access between the north and south sides of the tracks. The first Gay Street Viaduct across the tracks was built in 1919, and the current viaduct was built in 2005.

In 1876, the Knoxville Streetcar Company built the city's first trolley line along Gay Street. The trolleys, initially pulled by horses, were electrified by William Gibbs McAdoo in 1890. The Gay Street Bridge originally contained trolley tracks, which helped spark the development of South Knoxville, especially the Island Home Park and Vestal areas. Trolleys were a common site on Gay Street until the trolley lines were eliminated and the tracks were paved over in 1947 .

The development of suburbs on the periphery of Knoxville in the 1950s led to the rise of suburban shopping centers, and Gay Street, which had long struggled with traffic congestion and lack of parking, began to decline as a major retail corridor. In 1955, Rich's (which had purchased S. H. George's) moved to a new location, and Miller's abandoned plans to build a new store on Gay Street's 800 block. In an attempt to revitalize the downtown area, several Knoxville businessmen formed the Downtown Knoxville Association in 1956. Following the DKA's suggestions, more parking space was created for Gay Street businesses and storefronts were renovated, but efforts to revitalize Gay Street as a major commercial corridor were largely unsuccessful.

During the 1970s and 1980s, Gay Street transitioned from a retail corridor to an office market, symbolized by the erection of the Plaza and Riverview towers, and the renovation of the Andrew Johnson Hotel as an office building. During the same period, successful efforts to save the Bijou laid the foundation for the preservation group Knox Heritage, and more focus was placed on the preservation of Gay Street's historical integrity. More recently, a number of Gay Street high-rises, including the Holston, Sterchi Lofts, and the upper levels of the Burwell Building, have been successfully renovated as downtown condominium space.

In 2012, the American Planning Association named Gay Street one of its top 10 "Great Streets" in America. 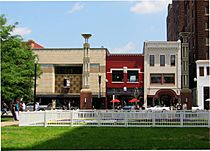 The 500 block of South Gay, viewed from Krutch Park

The Gay Street Commercial Historic District, added to the National Register in 1986, originally consisting of 35 buildings constructed circa 1880—1940 along Gay Street and adjacent side streets. The buildings range from 1890s-era wholesaling outlets to 1930s-era movie theaters. One of the buildings listed, the Fouche Block, was demolished in 1993. Another listing, the Hope Clock, was moved to West Knoxville in 2004, and was replaced by a new street clock in 2007. One notable non-contributing building is the 1905 Miller's building, which was not included due to extensive exterior modifications which have since been removed.

The Southern Terminal and most of Gay Street's 100 block were listed on the National Register as contributing properties within the Southern Terminal and Warehouses Historic District. The Andrew Johnson Hotel, the Bijou Theatre (listed as the Lamar House Hotel), and the Knox County Courthouse were all listed individually. Notable contributing properties in the Gay Street Commercial Historic District include:

All content from Kiddle encyclopedia articles (including the article images and facts) can be freely used under Attribution-ShareAlike license, unless stated otherwise. Cite this article:
Gay Street (Knoxville) Facts for Kids. Kiddle Encyclopedia.