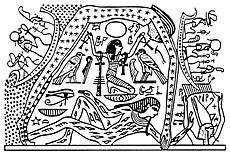 In Egyptian mythology, Geb was the god of the earth. Geb was the husband and brother of the sky goddess Nut and the father of Osiris, Isis, Nephthys, Horus the Elder, and Seth. When Seth and Horus (Osiris' son) fought to become the king of Egypt, Geb made Horus the ruler of the living. Geb's parents are Tefnut and Shu.

The ancient Egyptians believed that earthquakes were Geb's laughter.

The animals of Geb are a snake and a goose (a goose is sometimes depicted on Geb's head). Geb is sometimes equivalent to Greek titan Kronos. Geb's name means "weak one" or "lame one". Geb is also god of vegetation, and his other names are Seb, Keb, Kebb, Qeb, and Sebb.

Geb hatched his egg, which would become the sun. Geb married Nut and had five children. Their names were Osiris, Isis, Nephthys, Horus and Seth. Osiris and Isis married and eventually Set and Nephtys married. One night Set measured Osiris to make a tomb for him. They made a huge festival and there were many presents. The last one was a little box. A couple of villagers tried to fit into the box but it didn’t work. Then Osiris came and it fit perfectly! But then Set shut it with Osiris inside and put molten lead over it so Osiris could not breathe. When Isis found out, she was very sad and cried. She searched desperately for Osiris' body. Isis eventually found the body and buried it properly. She looked at Osiris and then closed the lid gently. Set, terrified that Isis may bring him back to life, searched for Osiris' buried body. And, when Set found the tomb he cut him into pieces. Isis put Osiris back together so he looked like a person again. Then Isis had her first child named Horus. When Horus found out that his dad died, he tried to kill Set and Set tried to kill Horus. Eventually Set got a huge wound that was filled with blood. When that happened, Geb said that Horus could take over Osiris’ place.

In Geb’s temple, priests fed him everyday like many of the other gods. When gifts were given, people were allowed to go to the gate or the forecourt. The priests would collect gifts that the ordinary Egyptians gave to the gods. Priests would pray to honor Geb for the people who came to the temple. The temple was made out of big stone columns that supported a great big hall. There were also very big gates that opened up to the Great Hall. The rooms or chambers were lit by candles, and incense would make the rooms smell nice and clean the air in the temple. The chambers gradually decreased in size as priests went in and created a mysterious feeling. The priests then found the chapel in the shrine, which contained the Naos (a naos is a small shrine) which had the statue of Geb.

Geb’s symbol was a goose and his skin was sometimes green, representing the Nile River or black representing rich soil for vegetation. Geb was depicted as a man wearing the crown of the North and other times he wore the crown of the South of Egypt. Geb also sometimes wore a white crown or a goose on his head representing the earth. Geb held a staff in his left hand and in his right hand he usually held an ankh, which is the hieroglyph that meant life. Not only did Geb wear a goose on top of his head but sometimes his would be covered by a goose head.

Geb was so powerful that when he laughed, he made earthquakes start. That is why he was named the Great Cackler. Just like other gods, Geb was very strong and could live a long time. To show his powers for making life from the earth, Geb is sometimes drawn with flowers coming out of his elbow. He had many names which were Geb, Gebb, Seb, Sebb, Keb, and Kebb. Geb was also a Greek god named Kronos. Although he was not as famous as his daughters and brothers, he still had an important job.

All content from Kiddle encyclopedia articles (including the article images and facts) can be freely used under Attribution-ShareAlike license, unless stated otherwise. Cite this article:
Geb Facts for Kids. Kiddle Encyclopedia.