Shu (Egyptian šw, "emptiness" or "he who rises up") was one of the primordial Egyptian gods, spouse and brother to goddess Tefnut, and one of the nine deities of the Ennead of the Heliopolis cosmogony. He was the god of peace, lions, air, and wind. 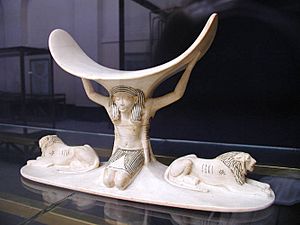 Headrest with Shu, on the base, supporting the sky

In Heliopolitan theology, Atum created the first couple of the Ennead, Shu and Tefnut by by spitting. Shu was the father of Nut and Geb and grandfather of Osiris, Isis, Set, and Nephthys. His great-grandsons are Horus and Anubis.

As the air, Shu was considered to be a cooling, and thus calming, influence, and pacifier. Due to the association with dry air, calm, and thus Ma'at (truth, justice, order, and balance), Shu was depicted as the dry air/atmosphere between the earth and sky, separating the two realms after the event of the First Occasion. Shu was also portrayed in art as wearing an ostrich feather. Shu was seen with between one and four feathers. The ostrich feather was symbolic of lightness and emptiness. Fog and clouds were also Shu's elements and they were often called his bones. Because of his position between the sky and earth, he was also known as the wind.

In a much later myth, representing a terrible weather disaster at the end of the Old Kingdom, it was said that Tefnut and Shu once argued, and Tefnut left Egypt for Nubia (which was always more temperate). It was said that Shu quickly decided that he missed her, but she changed into a cat that destroyed any man or god that approached. Thoth, disguised, eventually succeeded in convincing her to return.

The Greeks associated Shu with Atlas, the primordial Titan who held up the celestial spheres, as they are both depicted holding up the sky.

According to the Heliopolitan cosmology, Shu and Tefnut, the first pair of cosmic elements, created the sky goddess, Nut, and the earth god, Geb. Shu separated Nut from Geb as they were in the act of love, creating duality in the manifest world: above and below, light and dark, good and evil. Prior to their separation, however, Nut had given birth to the gods Isis, Osiris, Nephthys (Horus) and Set. The Egyptians believed that if Shu did not hold Nut (sky) and Geb (earth) apart there would be no way for physically-manifest life to exist.

Shu is mostly represented as a man. Only in his function as a fighter and defender as the sun god and he sometimes receive a lion's head. He carries an ankh, the symbol of life.

All content from Kiddle encyclopedia articles (including the article images and facts) can be freely used under Attribution-ShareAlike license, unless stated otherwise. Cite this article:
Shu (god) Facts for Kids. Kiddle Encyclopedia.