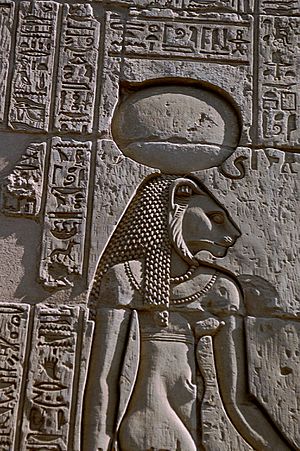 Tefnut with a head of the lion with a solar disk above head.

Tefnut was the ancient Egyptian goddess of water and fertility. She and her brother and husband, Shu, were created by Atum, Ra or Amun. Tefnut was the mother of Nut and Geb also she is associated with the lion. In art she is represent as a woman with head of the lion with Sun disc.

Tefnut, along with Shu, were the first deities created by Ra. She had other names, such as Tefenet and Tefnet. She was mainly in charge of moisture, but was also responsible for Order, Time, Justice, Heaven and Hell. She was very closely related to both the sun and the moon. She was known as both the left (moon), and right (sun): 'Eyes of Ra.'

Once Tefnut fled from Ra as a lioness, causing a great drought. Only Thoth could persuade her to return, so he went to Nubia and got her back. When she got back, there was great rejoice in all the temples. After that incident, Tefnut, normally wearing her fathers’ sun disk, was seen as a lioness, or a woman with a lions’ head. Very rarely ever again was she seen portrayed as a full woman. When Tefnut was in the royal court, she wore a crown made of sprouting plants. Sometimes she was seen lying horizontally between the ground and the sky. She was sometimes pictured with her husband, Shu, helping to hold up Nut. She cried with the pain, and when she cried, that made the ground fertilized.

Tefnut sat in judgment of the dead in the underworld. Tefnut wears her fathers’ sun disk, a symbol of power. She carries a scepter and wears an ankh, the symbol of life. As she was the goddess of moisture, she was also related to other deities of moisture and wetness. She was seen holding up the sky with her brother/husband Shu. As she was in charge of moisture, she held other roles as well. Some of them were: Order, justice, time, the weather,Heaven, and Hell. Above all, her main role was to bring moisture down on the ancient Egyptians.

Tefnut was worshipped in lion form in Leontopolis (May-ta-hut). Part of the city of Denderah (Iunet), was known as ‘The House of Tefnut.’ Some of Tefnut’s festival dates were the 20th of August, the day of satisfying the Hearts of the Ennead. Another festival date was the 29th of October, which was the day of Going Forth of Het-Hert and the Ennead. The last festival date was the 15th of November, the Ennead Feast in the House of Kay Heru and Wasir. Tefnut does not have any main centers of Worship, or any known temples dedicated to her.

All content from Kiddle encyclopedia articles (including the article images and facts) can be freely used under Attribution-ShareAlike license, unless stated otherwise. Cite this article:
Tefnut Facts for Kids. Kiddle Encyclopedia.