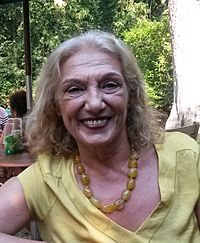 Gemma Salem (2 August 1943 – 20 May 2020) was a Turkish-born Swiss writer. He was born in Ankara, Turkey. In 1982, Salem was nominated for the Prix Médicis for her novel Le Roman de Monsieur Boulgakov, and was supported by Marthe Robert until the last round of voting. She won the Schiller Prize in 1992 and was on the list of winners for the Prix Médicis essai and the Prix Colette in 1993.

All content from Kiddle encyclopedia articles (including the article images and facts) can be freely used under Attribution-ShareAlike license, unless stated otherwise. Cite this article:
Gemma Salem Facts for Kids. Kiddle Encyclopedia.