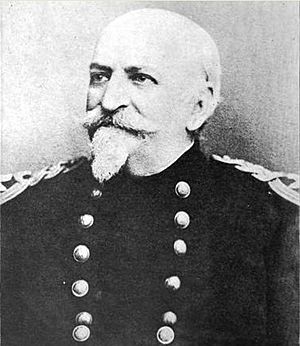 George Bell (March 12, 1828 – January 2, 1907) was a United States Army Brigadier General. He was prominent as a subsistence and commissary officer in the Union Army during and after the American Civil War.

George Bell was born in Hagerstown, Maryland on March 12, 1828. He graduated from the United States Military Academy in 1853 and was appointed a Second Lieutenant of Artillery.

Initially assigned as a general's aide in Texas at the start of the Civil War, Bell transferred to the Maryland area and was assigned as Quartermaster in Annapolis. From 1861 until 1865 he continued to serve in logistics positions, including: Officer in Charge of the depot at Alexandria, Virginia and Instructor of Commissaries; Assistant Commissary, Army of the Potomac; Chief Commissary, Department of the Susquehanna; and Officer in Charge of the depot at Washington, D.C.. During the war Bell received brevet promotions to Major, Lieutenant Colonel, Colonel and Brigadier General.

Bell retired with the permanent rank of Colonel in 1892. In retirement he resided in Washington, D.C. In 1904 Bell was promoted to Brigadier General on the retired list.

He died in Washington on January 2, 1907 and was buried in Hagerstown's Rose Hill Cemetery.

All content from Kiddle encyclopedia articles (including the article images and facts) can be freely used under Attribution-ShareAlike license, unless stated otherwise. Cite this article:
George Bell (brigadier general) Facts for Kids. Kiddle Encyclopedia.