The George Conrad Hutzler Farm, also known as the Conrad Hutzler Farm, is a historic farmstead located on South Manitou Island in Lake Michigan. One of the farm's owners, George Conrad Hutzler, Jr., was the first to experiment with hybridization of Rosen rye and Michelite pea beans; within 20 years of his experimentation, 80% of the pea bean crop in the United States was descended from Michelite seeds grown on South Manitou Island. It was listed on the National Register of Historic Places in 1991.

George Conrad Hutzler died in 1896 and was buried on the farm. His son George Conrad Jr.(born on the island in 1872) took over ownership of the farm. George Conrad Jr. and his son Lewis ran the farm for a number of years. In the 1920s, researchers from Michigan Agricultural College (now Michigan State University) chose South Manitou Island to work on experimental hybridization of rye plants, due primarily to its isolation from other rye crops which prevented accidental cross-pollination. The Hutzlers were notable partners in the effort, and won a number of awards for the varieties of Rosen Rye and the Michilite pea bean that they developed.

However, during the Great Depression, transportation on the Great Lakes declined, and South Manitou Island farmers had a more difficult time getting their crops to market; even the experimental farming that many farm families, including the Hutzlers, engaged in could not sustain the farms on the island. As a result, families began leaving in the 1940s. Louis Hutzler eventually married and moved to Hastings, Michigan. George Conrad Hutzler Jr. died on the farm in 1951 and is buried there.

After George Conrad Hutzler Jr.'s death, a development group headed by William Boals purchased the farm from his son. They rented the farm to the Riker family. However, development activities never materialized, and in 1970 Boals sold the property to the National Park Service. The Rikers, by then the last active farm family on the island, were asked to relocate, and the farm (and other properties on South Manitou Island) were included as part of the Sleeping Bear Dunes National Lakeshore. 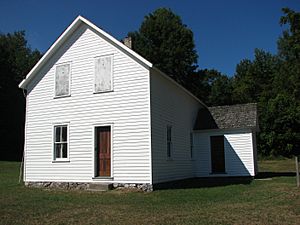 The George Conrad Hutzler Farm is located on 160 acres (65 ha) near the center of the island. The farm contains a house, barn, five shed, a chicken coop, and a granary surrounded by old fields.

The George Conrad Hutzler house is a 1-1/2 story wood frame structure with clapboard siding on a concrete foundation. The house has a gable roof covered in hexagonal slate tiles. The main section measures 30 feet (9.1 m) by 30 feet (9.1 m), and a small shed-roof addition is built on one side.

The associated barn is a gable-roofed structure on a wooden foundation. It is clad with vertical board siding and roofed with wooden shingles. It measures 58 feet (18 m) by 36 feet (11 m) and has a pair of large double wooden doors on one side.

The five sheds are all gable roofed wooden structures. They are:

The granary is a 1-1/2 story wood frame structure measuring 18 feet (5.5 m) by 20 feet (6.1 m), with a small one-story shed attached to the rear. It has a wood foundation and is covered by a gable roof with wood shingles. A corn crib is on one side.

All content from Kiddle encyclopedia articles (including the article images and facts) can be freely used under Attribution-ShareAlike license, unless stated otherwise. Cite this article:
George Conrad Hutzler Farm Facts for Kids. Kiddle Encyclopedia.