Giampiero Boniperti ( 4 July 1928 – 18 June 2021) was an Italian footballer who played his entire 15-season career at Juventus between 1946 and 1961, winning five Serie A titles and two Coppa Italia titles. He also played for the Italy national team at international level, and took part at the 1950 and 1954 FIFA World Cup finals, as well as the 1952 Summer Olympics with Italy. After retirement from professional football, Boniperti was a CEO and chairman of Juventus and, later, a deputy to the European Parliament.

A forward, Boniperti is regarded by several pundits, including Mario Sconcerti, as one of Italy's and Juventus's greatest ever players, and is considered by some in the sport, such as Bruno Nicolè, to be Italy's greatest player of all time; with 182 goals in all competitions, Boniperti was the highest goalscorer in Juventus history for more than 40 years, until his record was bested by Alessandro Del Piero on 10 January 2006. Del Piero also broke his club record of 443 Serie A appearances on 14 February 2010, when he played his 444th Serie A game in a 3–2 win against Genoa; with 443 Serie A appearances for Juventus, Boniperti is currently third in the club's rankings, behind only Del Piero and Gianluigi Buffon. Boniperti also held the record for most minutes played in Serie A by a Juventus player (39,680), until his record was surpassed by Buffon on 19 March 2017, in the 66th minute of a 1–0 away win over Sampdoria. Boniperti is the eleventh-highest goalscorer of all-time in Serie A. In March 2004, he was named by Pelé as one of the world's top 125 greatest living footballers.

Born in Barengo, Piedmont, Boniperti signed for Juventus at age 16; he had already built himself a reputation prior to this at youth level, as he scored 11 goals in one match. He played his first match for the Old Lady in Serie A on 2 March 1947 against A.C. Milan, which ended in a 2–1 defeat. His first goal for them in the league was three months later, against Sampdoria. Juventus ended the 1946–47 Serie A season as runners-up to local rivals Torino, Giampiero ended the season with five goals in six games to his name.

Although he began as a centre forward, he could play also as an inside forward or on the right-wing. In his second season with Juventus, he was 20 years old and scored 27 goals during that season, finishing above Valentino Mazzola as the league's topscorer. Boniperti's first league championship with Juventus was during the 1949–50 season. By his 24th birthday he had scored 100 goals for the club, adding a second scudetto title to his name in 1951–52. Although he was named the club's captain in 1954, for much of the 1950s Juve and Boniperti struggled to put the club back to the top of the Italian championship. 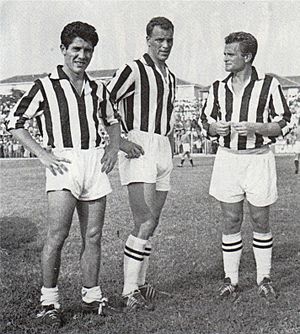 From left to right: Omar Sívori, John Charles and Boniperti, the attacking Magical Trio of Juventus at the turn of the 1950s and 1960s.

In 1957 Juventus signed two forwards: John Charles and Omar Sivori. With them, Boniperti would be a part of what was referred to as the Magical Trio. During Boniperti's last four seasons at the club before his retirement, Juventus was successful in the Italian league, winning the Serie A three times (1957–58, 1959–60 and 1960–61), and the Coppa Italia twice (1958–59 and 1959–60). At the time of his retirement, Boniperti was Juventus' all-time top goalscorer with 182 in all competitions, this record stood for over 40 years before Alessandro Del Piero beat it on 10 January 2006. As of 2010, Boniperti was the second top goalscorer of all-time at Juventus and was seventh on the list of all-time top appearances for the club. With 443 appearances in Serie A for Juventus, he held the club record for most appearances in the competition, until long-serving player and former Juventus captain Alessandro Del Piero beat it on 14 February 2010. 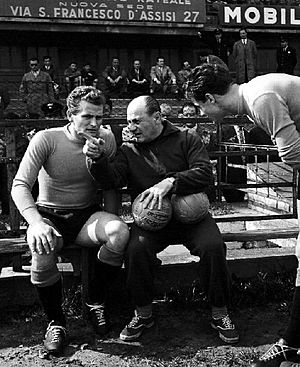 Boniperti (left) as Italy captain, in private with the Azzurri coach Lajos Czeizler in 1954.

After playing 14 games in the Serie A league, Boniperti was called up to play for the Italy national football team, making his international debut on 9 November 1947, in a game against Austria; the match ended in a 5–1 loss to the Austrian side. He got even with Austria a couple of years later, when in May 1949 he scored his first international goal for Italy, with a 3–1 victory. Boniperti managed to achieve 38 caps (24 of which he played as captain) and scored 8 goals for Italy. Boniperti played for Italy in the 1950 and 1954 FIFA World Cup finals (captaining the team in the latter edition of the tournament), as well as in the 1952 Summer Olympics. 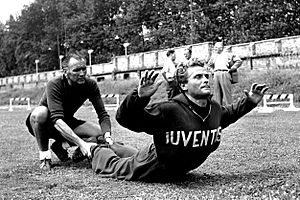 Boniperti (right) in training with Bianconeri in the 1951–52 season

A talented, creative, and prolific forward, with good technique, Boniperti is regarded by several pundits as one of the greatest and most successful Italian players of all time, and is considered by some in the sport, including Alessandro Del Piero, as one of Juventus's greatest players ever. A forward, he began his career as a striker, making a name for himself due to his eye for goal, and later emerging to prominence as a goalscorer for much of his career; in this role, he was usually supported by teammates such as John and Karl Aage Hansen, and Karl Aage Præst. As a centre-forward, he was known for his ability in the air and for having the capacity to score with both feet, as well as his head. A team player, in the later part of his career, he moved into a deeper position, functioning as a second striker or inside forward, as an attacking midfielder, as a winger, or even as a central midfielder, as a defensive midfielder, or as a midfield playmaker. Due to his ball control, technical ability, vision, tactical intelligence, and passing range, he excelled as an assist provider during the final few years of his career, creatively supporting his more offensive team mates John Charles and Omar Sívori. In addition to his footballing ability, he was also known for his leadership.

"Winning is not important, it is the only thing that counts!"

—Boniperti on Juventus's winning philosophy, at the inauguration of the Juventus Stadium, in 2011.

A short while after his retirement, the Agnelli family offered Boniperti an executive position as a director in the club's management team; in 1981, he was appointed the chairman of the board of directors (Italian: presidente del consiglio di amministrazione), a position he held for many years, and still had a role at the club as one of the honorary chairmen (Italian: Presidenti Onorari, served along with Franzo Grande Stevens).

From 1994 until 1999, Boniperti was elected as a deputy in the European Parliament with the centre-right wing party Forza Italia.

Boniperti's grandson Filippo has followed in his grandfather's footsteps in pursuing a career in football, and played for Juventus and the Italy U19 team as a midfielder. He is currently a free agent.

Boniperti died in Turin on 18 June 2021 due to heart failure, aged 92. The Italy national team wore black armbands in tribute to him in their match on 20 June against Wales in the UEFA Euro 2020.

All content from Kiddle encyclopedia articles (including the article images and facts) can be freely used under Attribution-ShareAlike license, unless stated otherwise. Cite this article:
Giampiero Boniperti Facts for Kids. Kiddle Encyclopedia.