Gian Maria Volonté (9 April 1933 – 6 December 1994) was an Italian actor, remembered for his versatility as an interpreter, his outspoken left-wing leanings and fiery temper on and off-screen. He is perhaps most famous outside Italy for his roles in four Spaghetti Western films: Ramón Rojo and El Indio in Sergio Leone's A Fistful of Dollars (1964) and For a Few Dollars More (1965), El Chuncho Munoz in Damiano Damiani's A Bullet for the General (1966) and Professor Brad Fletcher in Sergio Sollima's Face to Face (1967).

In Italy and much of Europe, he was notable for his roles in high-profile social dramas depicting the political and social stirrings of Italian and European society in the 1960s and 1970s, including four films directed by Elio Petri – We Still Kill the Old Way (1967), Investigation of a Citizen Above Suspicion (1970), The Working Class Goes to Heaven (1971) and Todo modo (1976). He is also recognized for his performances in Jean-Pierre Melville's Le Cercle Rouge (1970), Giuliano Montaldo's Sacco & Vanzetti (1971) and Francesco Rosi's Christ Stopped at Eboli (1979).

Volonté was born in Milan but grew up in Turin. His father Mario was a fascist officer from Saronno (province of Varese), who in 1944 was in command of the Brigata Nera of Chivasso, near Turin. His mother, Carolina Bianchi, belonged to a wealthy Milanese industrial family and his younger brother Claudio was an actor as well. He went to Rome to train for an acting career at the Accademia Nazionale di Arte Drammatica Silvio D'Amico, which he left in 1957. He had a brief career in television and acting in Shakespeare and Goldoni plays on the stage, before establishing his film career.

Volonté made his debut in 1960 in Sotto dieci bandiere, directed by Duilio Coletti. Just four years later, he played "Ramón Rojo" in A Fistful of Dollars (1964), and "El Indio" in For a Few Dollars More (1965), both for cash reasons as he did not consider either role serious. Both films were directed by the then-unknown Sergio Leone, and Volonté's roles in them would bring him his greatest recognition from American audiences. He played Carlo Levi in Christ Stopped at Eboli (1979), which was based on Levi's autobiographical account of his years in internal-exile in Aliano, south Italy, in the 1930s. Volonté played the memorable role of the Bandito-turned-guerrilla, El Chuncho, in A Bullet for the General (1966).

Volonté's performances as memorable but neurotic characters, or as a gifted leader of brigands or revolutionaries, together with the unexpected, worldwide success of the films, gave him international fame. Volonté had already played comedies, including A cavallo della tigre (1961), by Luigi Comencini, and confirmed his versatility in L'armata Brancaleone (1966). However, he found his main dimension in dramatic roles for Banditi a Milano (1968), by Carlo Lizzani, Sbatti il mostro in prima pagina (1972) by Marco Bellocchio, La Classe operaia va in paradiso (1972) by his friend Elio Petri and Il sospetto (1975) by Francesco Maselli. 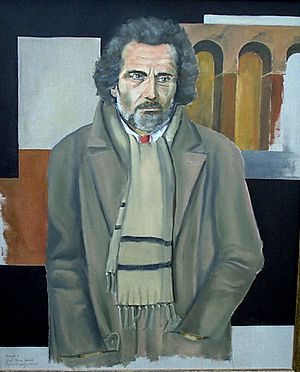 In 1968, Volonté won a Silver Ribbon as best actor for A ciascuno il suo, also directed by Elio Petri. Volonté received the same award for two other performances: Petri's Indagine su un cittadino al di sopra di ogni sospetto (1971, winner of an Academy Award as best foreign film), considered by many to be his finest; and in The Abyss (1989).

In 1983 he won the award for Best Actor at the 1983 Cannes Film Festival for La Mort de Mario Ricci. Four years later, at the 37th Berlin International Film Festival, he won the Silver Bear for Best Actor for Il caso Moro. 1988 Cannes Film Festival Official Selection, remarkable play as a Renaissance physician in The Abyss by André Delvaux from Marguerite Yourcenar's famous novel. In 1990, Volonté was named Best European Actor for Porte aperte. In 1991, at the Venice Film Festival, he won a Golden Lion for his career as a whole. Volonté played numerous roles outside Italy.

Volonté was a strong political activist and known for his pro-Communist leanings. In 1981, he helped Oreste Scalzone to flee from capture in Italy to Denmark. He was the partner of Italian actress Carla Gravina for almost 10 years after they met when they played Romeo and Juliet in a theatre production in 1960. The two had a daughter Giovanna, born in the early 1960s. Actress Angelica Ippolito was his companion from 1977 until his death in 1994.

Volonté died from a heart attack at the age of 61 in 1994 at Florina, Greece, during the filming of Ulysses' Gaze, directed by Theo Angelopoulos. Actor Erland Josephson replaced him in the role. Volonté's grave is in a small cemetery on the Sardinian island of La Maddalena, according his wishes. 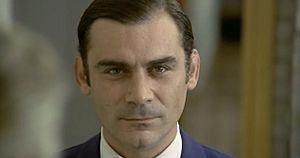 All content from Kiddle encyclopedia articles (including the article images and facts) can be freely used under Attribution-ShareAlike license, unless stated otherwise. Cite this article:
Gian Maria Volonté Facts for Kids. Kiddle Encyclopedia.