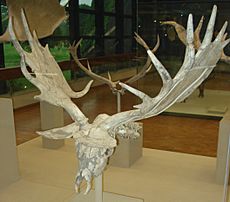 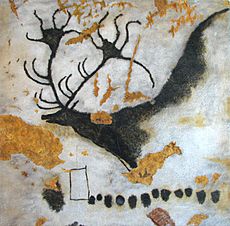 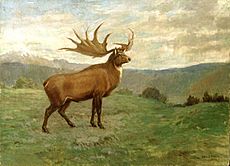 The Irish elk (Megaloceros giganteus) was one of the largest deer that ever lived. Its range extended across Eurasia, from Ireland to east of Lake Baikal and China.

The last known remains of the species have been carbon dated to about 7,700 years ago. Most skeletons have been found in Irish bogs. It was not closely related to either of the living species currently called elk – Alces alces (the European elk, or moose) or Cervus canadensis (the North American elk or wapiti). For this reason, the name "Giant Deer" is sometimes used.

In body size, the Irish Elk matched the living moose subspecies (Alces alces gigas) as the largest known deer. The Irish Elk got to a mass of about 450–600 kg (990–1,320 lb), with large specimens having weighed 700 kg (1,540 lb) or more, roughly similar to the Alaskan Moose. A significant collection of M. giganteus skeletons can be found at the Natural History Museum in Dublin.

The size of Irish Elk antlers is distinctive, and several theories have arisen as to their evolution. One theory was that their antlers, under constant and strong sexual selection, increased in size because males were using them in combat for access to females. It was also suggested that they eventually became so unwieldy that the Irish Elk could not carry on the normal business of life and so became extinct. This is simply nonsense, because no species survives that long if it is not effective in its habitat. Also, many other Pleistocene megafauna went extinct within a few thousand years of the end of the ice age. The Irish Elk is no different in that respect.

Larger deer species have antlers that are more than proportionately larger. This is due to allometry, or differential growth rate of body size and antler size during development. This suggests that the antlers of the species' ancestors were already large to begin with. Gould concluded that the large antler size and their position on the skull was very much maintained by sexual selection. Although they were ill-suited for combat between males, they were ideal to intimidate rivals or impress females. Unlike other deer, M. giganteus did not even have to turn its head to present the antlers to best effect, but could do this by simply looking straight ahead.

Theories about the extinction of ice age megafauna are of two kinds. One is that climate change was primary; the other claims that hunting by man was primary. Probably both causes contributed.

High amounts of calcium and phosphate compounds are needed to form antlers, and therefore large quantities of these minerals are required for the massive structures of the Irish Elk. The males (and male deer in general) met this requirement partly from their bones, replenishing them from food plants after the antlers were grown or reclaiming the nutrients from discarded antlers (as has been observed in extant deer). Thus, in the antler growth phase, Giant Deer were suffering from a condition similar to osteoporosis.

When the climate changed at the end of the last glacial period, the vegetation in the animal's habitat also changed. However, the most recent specimen of M. giganteus in northern Siberia, dated to 8,000 years ago – well after the end of the last glacial period – shows no sign of nutrient stress. They come from a region with a continental climate where the proposed vegetation changes had not (yet) occurred.

The disappearance of the local populations of Irish Elk is not surprising, because as climate warmed they would be separated from each other by water. The situation is less clear for the Irish Elk in continental Eurasia east of the Urals. A combination of human presence along rivers and slow decrease in habitat quality in upland areas presented the last Irish Elk with the choice of either good habitat but considerable hunting pressure, or general absence of humans in a suboptimal habitat.

All content from Kiddle encyclopedia articles (including the article images and facts) can be freely used under Attribution-ShareAlike license, unless stated otherwise. Cite this article:
Irish elk Facts for Kids. Kiddle Encyclopedia.