Kids Encyclopedia Facts
This page is about the composer. For the 18th-century decorative artist, see Michael Angelo Pergolesi. 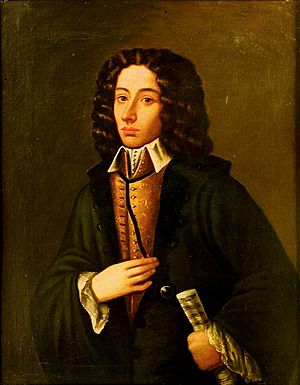 Giovanni Battista Draghi ( 4 January 1710 – 16 or 17 March 1736), often referred to as Giovanni Battista Pergolesi, was an Italian Baroque composer, violinist and organist. His best-known works include his Stabat Mater and the opera La serva padrona (The Maid Turned Mistress). His compositions include operas and sacred music. He died of tuberculosis at the age of 26. 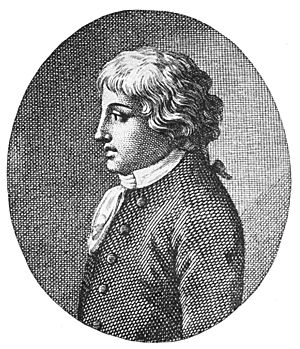 Born in Jesi in what is now the Province of Ancona (but was then part of the Papal States), he was commonly given the nickname "Pergolesi", a demonym indicating in Italian the residents of Pergola, Marche, the birthplace of his ancestors. He studied music in Jesi under a local musician, Francesco Santi, before going to Naples in 1725, where he studied under Gaetano Greco and Francesco Feo among others. On leaving the conservatory in 1731, he won some renown by performing the oratorio in two parts La fenice sul rogo, o vero La morte di San Giuseppe [it] ("The Phoenix on the Pyre, or The Death of Saint Joseph"), and the dramma sacro in three acts, Li prodigi della divina grazia nella conversione e morte di san Guglielmo duca d’Aquitania ("The Miracles of Divine Grace in the Conversion and Death of Saint William, Duke of Aquitaine"). He spent most of his brief life working for aristocratic patrons such as Ferdinando Colonna, Prince of Stigliano, and Domenico Marzio Carafa, Duke of Maddaloni.

Pergolesi was one of the most important early composers of opera buffa (comic opera). His opera seria, Il prigionier superbo, contained the two-act buffa intermezzo, La serva padrona (The Servant Mistress, 28 August 1733), which became a very popular work in its own right. When it was performed in Paris in 1752, it prompted the so-called Querelle des Bouffons ("quarrel of the comic actors") between supporters of serious French opera by the likes of Jean-Baptiste Lully and Jean-Philippe Rameau and supporters of new Italian comic opera. Pergolesi was held up as a model of the Italian style during this quarrel, which divided Paris's musical community for two years.

Pergolesi also wrote sacred music, including a Mass in F and three Salve Regina settings. The Lenten Hymn ‘God of Mercy and Compassion’ by Redemptorist priest Edmund Vaughan is most commonly set to a tune adapted by Pergolesi. It is his Stabat Mater (1736), however, for soprano, alto, string orchestra and basso continuo, which is his best-known sacred work. It was commissioned by the Confraternita dei Cavalieri di San Luigi di Palazzo, which presented an annual Good Friday meditation in honor of the Virgin Mary. Pergolesi's work replaced one composed by Alessandro Scarlatti only nine years before, but which was already perceived as "old-fashioned," so rapidly had public tastes changed. While classical in scope, the opening section of the setting demonstrates Pergolesi's mastery of the Italian baroque durezze e ligature style, characterized by numerous suspensions over a faster, conjunct bassline. The work remained popular, becoming the most frequently printed musical work of the 18th century, and being arranged by a number of other composers, including Johann Sebastian Bach, who reorchestrated and adapted it for a non-Marian text in his cantata Tilge, Höchster, meine Sünden (Root out my sins, Highest One), BWV 1083.

Pergolesi wrote a number of secular instrumental works, including a violin sonata and a violin concerto. A considerable number of instrumental and sacred works once attributed to Pergolesi have since been shown to be misattributed. Much of Igor Stravinsky's ballet Pulcinella, which ostensibly reworks pieces by Pergolesi, is actually based on works by other composers, especially Domenico Gallo. The Concerti Armonici are now known to have been composed by Unico Wilhelm van Wassenaer. Many colorful anecdotes related by Pergolesi's 19th-century biographer, Francesco Florimo, were later revealed as hoaxes.

Pergolesi died on 16 or 17 March 1736 at the age of 26 in Pozzuoli from tuberculosis and was buried at the Franciscan monastery one day later.

Pergolesi was the subject of a 1932 Italian film biopic Pergolesi. It was directed by Guido Brignone with Elio Steiner playing the role of the composer.

The standard catalogue of Pergolesi's works was produced by Marvin Paymner in 1977, ascribing a unique P number to each item so that – for example – the well-known Stabat Mater is P.77.

All content from Kiddle encyclopedia articles (including the article images and facts) can be freely used under Attribution-ShareAlike license, unless stated otherwise. Cite this article:
Giovanni Battista Pergolesi Facts for Kids. Kiddle Encyclopedia.