Gladstone Central is bounded by Auckland Inlet on the north, Auckland Creek and Side Street on the west, the railway line on the east and a combination of Scenery Street and Tank Street on the south. The main business and shopping street is Goondoon Street which runs over a hill, its apex being at the intersection with Roseberry Street. 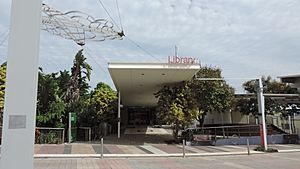 The Gladstone City Library is at 39 Goondoon Street; it is operated by the Gladstone Regional Council. 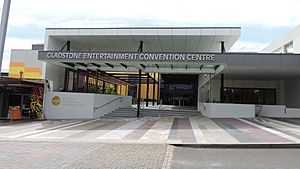 The Gladstone Entertainment & Convention Centre is at 58 Goondoon Street; it is operated by the Gladstone Regional Council. It features an auditorium seating 674 people, a flat floor space which can accommodate 1,500 people standing, an outdoor 600 square metres (6,500 sq ft) marquee on a hard stand, and a number of meeting rooms. 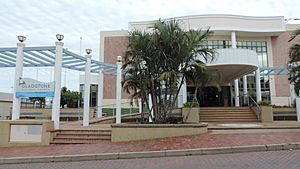 There is a Gladstone Regional Council administration centre at 101 Goondoon Street.

All content from Kiddle encyclopedia articles (including the article images and facts) can be freely used under Attribution-ShareAlike license, unless stated otherwise. Cite this article:
Gladstone Central, Queensland Facts for Kids. Kiddle Encyclopedia.