Kids Encyclopedia Facts
This page is about the lake. For the river, see Afon Glaslyn.

Glaslyn (Welsh: Blue lake) is a lake in the Snowdonia National Park in Gwynedd, north-west Wales.

Glaslyn is the source of the Afon Glaslyn, the major river of Gwynedd, which runs east to the reservoir of Llyn Llydaw before turning south-west to reach the sea at Porthmadog.

In 2020, small particles of microplastic pollution - deposited by rain - were found in the lake, triggering a further investigation of the extent of environmental damage in UK lakes and mountains. 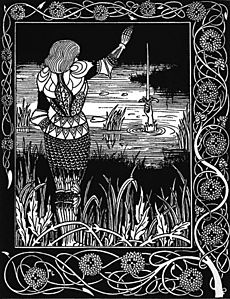 In Arthurian legend, Bedivere threw Excalibur into a lake identified by some as Glaslyn on the slopes of Snowdon.

In Welsh folklore, Arthur had Bedivere throw his sword Excalibur into Glaslyn, where Arthur's body was later placed in a boat to be carried away to Afallon. Arthur's men then retreated to a cave on the slopes of Y Lliwedd, where they are said to sleep until such time as they are needed. Merlin is supposed to have hidden the golden throne of Britain among the cliffs north of Crib y Ddysgl when the Saxons invaded.

Glaslyn was also the final resting place of a water monster, known as an afanc (also the Welsh word for beaver), which had plagued the people of the Conwy valley. They tempted the monster out of the water with a young girl, before securing it with chains and dragging it to Glaslyn. A large stone known as Maen Du'r Arddu, below Clogwyn Du'r Arddu, is supposed to have magical powers. Like several other sites in Wales, it is said that if two people spend the night there, one will become a great poet while the other will become insane. Llyn Coch in Cwm Clogwyn has been associated with the Tylwyth Teg (fairies), including a version of the fairy bride legend.

All content from Kiddle encyclopedia articles (including the article images and facts) can be freely used under Attribution-ShareAlike license, unless stated otherwise. Cite this article:
Glaslyn Facts for Kids. Kiddle Encyclopedia.